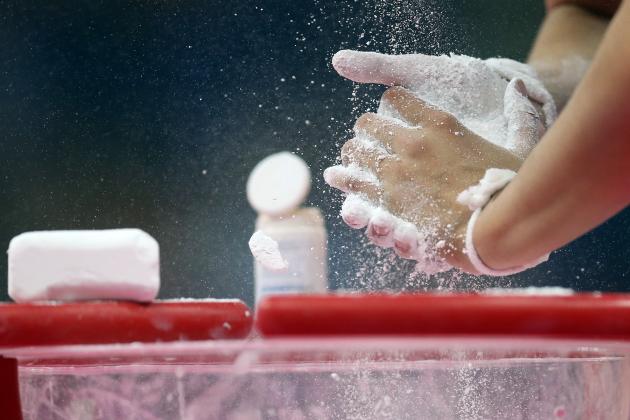 All-around world champion Jordyn Wieber has not qualified for the Olympic all-around final, falling prey to the two-athlete-limit-per-country rule in the competition.

Gabby Douglas, as expected, is in the final. Aly Raisman is the surprise, posting a better score than favorites Wieber or Douglas in Sunday's qualification rounds.

Then Russia's Viktoria Komova did even better. Qualifying scores won't matter in the long run, but as Komova's Day 2 performance illustrates, she definitely has the talent to interrupt the American parade.

Who will be the all-around favorites after the qualifying dust settles? Read on.

Huang has two top-five all-around finishes from World Championships—fourth in 2010, fifth in 2011. She also was third on the uneven bars in 2011.

She won't have the distraction of an apparatus final here; she would've qualified on uneven bars, but two teammates finished ahead of her.

But she'll need to improve her scores—particularly her 13.575 on the floor exercise—to contend in the final.

We have to include someone from a country other than the USA, Russia and China, don't we? The Romanian team has a couple of gymnasts in the mix, but it was the Italian Vanessa Ferrari who finished ahead of the Romanians in qualifying. She almost finished ahead of both Chinese gymnasts, too.

And while it may seem she was performing over her head, she does have a world all-around title...six years ago.

Now a 21-year-old veteran whose occupation is listed as "serves in the Army," Ferrari is a contender in the floor exercise. She's considerably weaker on the vault.

Deng has been here before, as she was part of the gold-medal winning Chinese team in '08. She moved on to London for the 2009 World Championships and was 11th in the all-around, and first on the balance beam. She came back to finish second in 2010.

She's back, though her qualifying scores don't seem to pose much of a threat to the American/Russian duopoly. She's strong on beam, but not so much on the floor.

With Wieber out, Aliya Mustafina is the most recent world champion in the final. She won the all-around at the 2010 World Championships and qualified for all four apparatus finals, reaching the podium in all except balance beam.

She was unable to defend her title, however. She suffered a knee injury at the European Championships that kept her out of the 2011 worlds.

In qualifying, she might not have wowed the audience or the judges on any particular apparatus, but she also shows no weaknesses.

Raisman wasn't expected to qualify ahead of Wieber and Douglas, but she didn't come from nowhere. She was fourth in the all-around at the 2011 World Championships. She was also in the top four in floor exercise and balance beam.

The 18-year-old struggles slightly on uneven bars, where she posted a 14.166 in qualifying.

The fact that Viktoria Komova has qualified once again is no surprise.

Hindered by a nagging injury for the entire year, she was finally forced to undergo ankle surgery in May of last year. She managed to not only make it back in time for the World Championships in early October, she finished ahead of all other competitors, except the one (Wieber).

The year before, she won the 2010 Youth Olympic Games all-around title. Her story and legacy has yet to be fully formed, but gymnastics was an obvious path for Viktoria all along. Her mother, Vera Kolesnikova, was a top Russian gymnast as well.

Douglas was the odd American out in the all-around qualifying at last year's World Championships. She was fifth in qualification, but that was one place behind Raisman and three behind Wieber. She wound up with the team gold and finished fifth in the uneven bars final.

So far, 2012 has been her year. She came into the American Cup as an alternate, but her unofficial all-around total was higher than that of official winner Wieber. She was second behind Wieber in the Visa Championships and won the all-around at the U.S. trials.