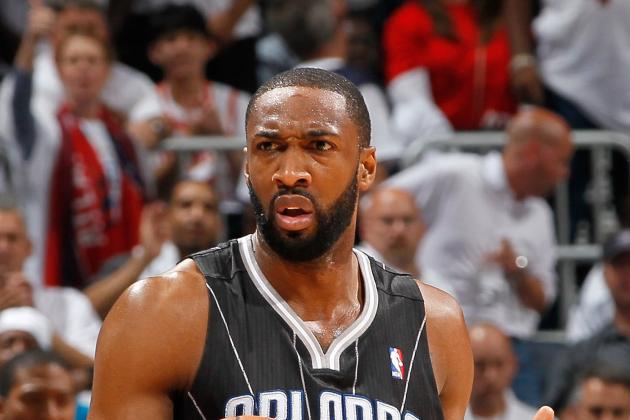 Most of this summer's NBA free agents have found homes.

Deron Williams re-signed with the Nets; Tim Duncan is staying in San Antonio; and Ray Allen is taking his talents to South Beach.

But what about Gilbert Arenas? Will any team choose to sign the three-time All-Star this offseason?

Agent Zero appeared in 17 regular-season games for the Memphis Grizzlies in 2011-12, averaging 4.2 points and 1.1 assists per game. And he produced 0.7 PPG and 0.2 APG in six playoff contests against the Los Angeles Clippers.

No, those aren't spectacular numbers, but you have to take into account that he only averaged 12.4 minutes per game during the regular season and 2.8 MPG in the postseason.

It's hard to believe that the 30-year-old Arenas will struggle to find a team this summer and may never log another minute in the NBA ever again.

A few years ago, the former Arizona Wildcat was one of the most unstoppable scorers in the entire league. During his days with the Washington Wizards, he put up at least 25 PPG in three consecutive seasons, including a career-high 29.3 PPG in 2005-06.

Unfortunately, injuries would take over, and his "guns in the locker room" incident in 2009—which caused him to miss several games due to suspension—completely ruined his reputation.

Arenas—who at one time looked as if he would go on to have a Hall of Fame career—is now a guy who most teams wouldn't even consider giving a chance.

That's what happens when you make poor decisions.

"Hibachi" definitely doesn't have the ability to drop 25 points a night like he used to, and his All-Star days are long gone. However, he still has a little left in the tank and could serve as a decent backup point guard.

Also, a team wouldn't have to break the bank to sign him. He could be had for the veteran's minimum, which is much, much cheaper than the $111 million contract that the Wizards gave him back in 2008.

It'll be interesting to see if Arenas is signed this summer. If he doesn't get pick up, fans may never see him on an NBA court ever again.