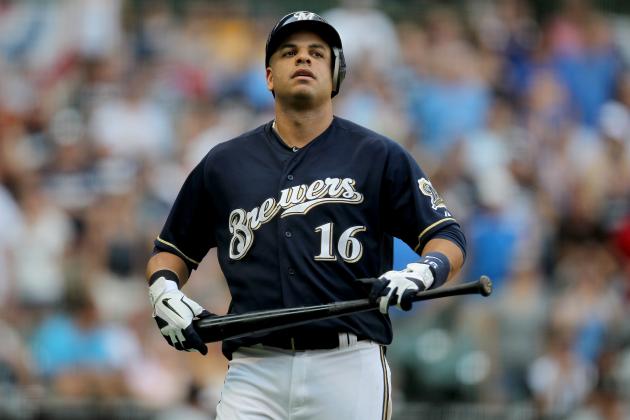 The jury is out as to whether or not the Milwaukee Brewers will be buyers or sellers at the July 31 non-waiver trade deadline. However, if the first half of the season is any indication of how the second half might play out, there's a decent chance general manager Doug Melvin will look to deal some of his most valuable trade chips in the coming weeks to try and restock for future seasons.

While Zack Greinke will likely continue to command the majority of trade interest this summer, there are a few other players who look to have at least some market value by the end of the month.

Who are these players and why on earth should the Brewers consider trading them? Let's take a look.

Why Milwaukee Could Trade Him: No room on roster with Jonathan Lucroy nearing return, attractive bat

Breakdown: Through no fault of his own, backup catcher George Kottaras has become an expendable asset this summer.

The injury to Jonathan Lucroy resulted in the promotion of 26-year-old veteran minor league catcher Martin Maldonado to the 25-man roster, whereupon he would seize the opportunity by flashing plus average defense and a solid approach at the plate, consequently keeping Kottaras in his same role. Now that Lucroy is nearly back, there's really no place for the 29-year-old catcher on the roster.

While the Brewers could easily demote Kottaras to their Triple-A club in Nashville, it would make a lot of sense for management to consider what they could get through trading him. Kottaras has already harbored a 0.8 WAR rating, according to FanGraphs, which is what his entire 2011 campaign amounted to.

FOX Sports' Ken Rosenthal recently confirmed that the Brewers are receiving calls for (among others) Kottaras, saying that he very much "remains trade bait" as the July 31 deadline nears. It should be interesting to see what Milwaukee would like in return for him; they can't expect much dealing him alone. A package-type deal could be on the horizon.

Breakdown: Once considered the gold standard of big-league closers, Francisco Rodriguez has performed far from what he once was as a 26-year-old fire-baller for the Los Angeles Angels. To that end, he has performed much worse this season compared to his time spent with Milwaukee in 2011.

Known for his strikeout capabilities on the mound, Rodriguez has garnered a strikeout rate of just 20.5 percent this season, down from 27.5 percent over 29 innings with the Brewers last season and noticeably lower than his career rate of 29.5 percent. Moreover, he's struggled to command his pitches and that's manifested itself in the form of a career-worst 1.47 WHIP. Couple that with a lofty 2012 salary, and it's difficult to picture the Brewers drawing much trade interest for Rodriguez this summer.

Yet, that hasn't exactly been the case. A person "familiar with the club's thinking" told Ken Davidoff of the New York Post that Rodriguez is atop the New York Mets' trade wish-list this summer. Struggling to find consistency from relievers not named Frank Francisco, it makes a certain amount of sense that New York would want Rodriguez back. They could shift the hard-throwing Francisco to the setup role and drop Rodriguez into their closer's role, where he believes he is much better suited to perform out of. That would then give them the formidable late-inning one-two punch they've been looking for.

Of course, such an acquisition might come at a hefty asking price. While the Brewers realize they probably won't get much back in return for Rodriguez, it certainly doesn't bode well for a potential deal that the Mets "won't trade their best prospects for a bat or a reliever". If that's the case, then maybe Milwaukee would be better suited to keep him for the rest of the season.

Why Milwaukee Could Trade Him: Market Value, Chance he won't re-sign in offseason

Breakdown: Before hitting the 15-day disabled list with right elbow tightness—an injury that has sidelined him up to this point in the season—on June 15, Shaun Marcum performed exceptionally. In his 13 starts this year, Marcum averaged 6.1 innings per start and garnered a WAR of 1.3. Last season, he lasted a whole out less per start and posted a WAR of 2.7. If not for injury, he would have easily surpassed the 3.0 WAR plateau or just the second time in his career.

Consequently, its easy to understand why Marcum's name began appearing in trade speculation toward the end of May and the early portion of June.

Probably the biggest rumor that had surfaced came from FOX Sports' Jon Morosi, when he tweeted that the Detroit Tigers would at the very least be interested in acquiring Marcum if the Brewers were so inclined to trade him.

File this away: #Tigers were interested in Shaun Marcum during the offseason Milwaukee acquired him. Could be option if healthy.

Detroit's rotation hasn't gotten enough production after Justin Verlander. The shaky combination of Max Scherzer, Rick Porcello, Drew Smyly and Doug Fister hasn't gotten the job done in Mo-Town, so it makes sense for them to be interested in acquiring a guy like Marcum, who is set to become an unrestricted free agent at season's end.

The Tigers have a few prospects that could entice Milwaukee into dealing the 30-year-old righty, as well. However, the longer Marcum remains on the disabled list, the less likely it will be for a deal to go through. It wouldn't hurt for Melvin to at least consider trading him, though.

Why Milwaukee Could Trade Him: Inconsistencies, Newfound interest in trade market

Breakdown: Signing Aramis Ramirez to a lucrative three-year contract this past winter, the Brewers probably had every intention of keeping the veteran third baseman through the end of the 2014 season. However, an abysmally slow start the season together with the fact that Milwaukee is headed toward selling rather than buying this summer, and the team's original vision may be cast aside as the deadline nears.

According to Tim Brown of Yahoo! Sports, the Los Angeles Dodgers have identified Ramirez as a possible upgrade at the third base position. The following is the tweet he sent out on Thursday to the rest of his followers.

If Brewers decide to sell, Dodgers have identified Aramis Ramirez as possible 3B upgrade. Prefer Chase Headley, however.

Jerry Hairston, Elian Herrera, Adam Kennedy and Juan Uribe have each tallied at least 141 plate appearances at third base for the Dodgers this season, together combining for a 1.8 WAR, if you go by FanGraphs' value distribution. Los Angeles' brass must believe that adding a guy like Ramirez, who has a 2.4 WAR this season, would make for more stability in the lineup and moreover help out a healthy Matt Kemp and Andre Ethier in their second-half run.

Of course, the next big question now applies to what Milwaukee could get in return for Ramirez, who was brought in to protect Ryan Braun in the batting order prior to the season. If anything, management could be looking to add a few MLB-ready arms in preparation for next season, and the Dodgers have a few names who could entice, including 27-year-old Chad Billingsley and former Brewer Chris Capuano.