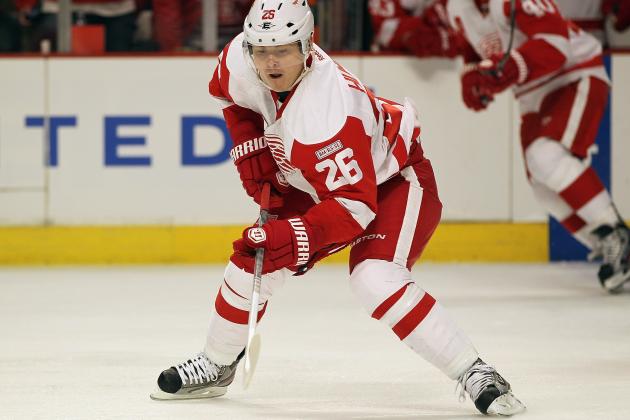 Calgary dealt a fifth-round pick in the 2013 NHL Entry Draft as well as an expiring contract (Jordan Henry) to the Washington Capitals in exchange for the rights to Capitals' offensive defenseman Dennis Wideman, whom they then signed to a five-year, $5.25 million deal.

Today, Feaster again showed that he isn't waiting for anything to make the moves he wants to make.

Prevailing thought around the NHL has been that until superstars Zach Parise and Ryan Suter make a decision on where they will be playing next season, other teams are stuck in a holding pattern, unwilling to commit money or time elsewhere until they know whether their offer to Parise or Suter has been accepted or rejected.

Some reports even indicate that a few free agents understand they are likely the "backup plan" to Parise or Suter and are waiting for those players to sign before they field offers.

Former Detroit Red Wing Jiri Hudler, who finished last season with 25 goals and 25 assists, was considered (along with P.A. Parenteau, who signed a similar four-year deal with the Colorado Avalanche) to be in the second tier of offensive forward free agents, perhaps a consolation prize to some team looking for help in its top six that didn't end up signing Zach Parise.

But don't tell Jay Feaster that, as today he signed the Czech winger to a four-year, $16 million contract.

While the Calgary Flames have never truly been "in" on Parise—speculation continues to put him most likely to sign with the New Jersey Devils, Pittsburgh Penguins, Minnesota Wild or Chicago Blackhawks—it was unexpected that Hudler decided to sign before Parise.

How many goals will Jiri Hudler score next season?

How many goals will Jiri Hudler score next season?

What is most surprising about the deal, however, is the term—four years, which is longer than expected for a player coming off his best season with an offensively gifted team. In addition, his shooting percentage was an unrealistically high 19.7 percent in the 2011-2012 season, placing him first on the Red Wings and just behind Tampa Bay Lightning sniper Steven Stamkos near the top of the league in that category.

Twenty-three of Hudler's 25 goals came at even strength, so he is capable of scoring in 5-on-5 situations. The Flames are likely to deploy him with the man advantage more than the Red Wings did, particularly after losing top-six forward Olli Jokinen to free agency. With the additional ice time and power play time, it is possible Hudler will provide the type of offense he did for the Red Wings last season.

Four years and $16 million seems expensive for a player whose performance was likely tied to the strength of the team around him combined with a little bit of luck, as noted by his unusually high shooting percentage. But that is the market value of a 50-point forward in the NHL today, and for a team looking to upgrade its top six, the Flames paid the going rate.

With the salary cap raising to a reported $70.2 million for the next season, the Flames now have the second highest payroll in the NHL for the 2012-2013 season, according to Capgeek, further signaling that the Flames are not in a stage of rebuilding despite missing the playoffs the last three seasons.

We'd like to send you the most entertaining Calgary Flames articles, videos, and podcasts from around the web.