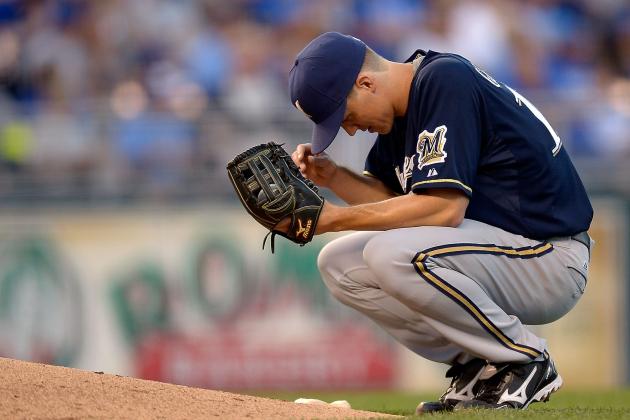 As Major League Baseball's annual July 31 non-waiver trade deadline draws nearer by the day, the Milwaukee Brewers continue to question whether or not they should become buyers or sellers come the final day of July. Currently treading water at 34-41, the Brewers haven't been a complete disaster this season, however, they haven't looked like a club destined for a postseason berth, either.

Easily the most pressing issue facing GM Doug Melvin and owner Mark Attanasio this summer is the trade status of Zack Greinke, who through the first half of the season has performed nothing short of Cy Young-worthy. His fabulous production this season will consequently offer tremendous trade value as the summer persists, and despite the numerous reports saying Milwaukee will opt not to trade him, you have to believe that if the Brewers continue to slip in the standings that they'll have no other choice but to deal their ace.

If that's the case, then the question obviously becomes: Which teams could be interested in trading for Greinke and what would they be willing to relinquish in order to attain his services?

I recently spoke with a few featured columnist here on Bleacher Report in the hopes of sorting out a few potential deals that could go down as the trade deadline nears.

With this trade, the Brewers would get a backup catcher who is MLB-ready, and a super utility infielder/outfielder who is also MLB ready with a bat. With Betances, they get the Yankees No. 2 prospect who, if he ever straightens out, can be very good. With Heathcott, they get a young outfielder they could use in maybe 2 years.

The Yankees just scouted Greinke’s latest start today. With the injuries to Sabathia and Pettitte, looking into Greinke makes a lot of sense.

My take: The news that the Yankees scouted Greinke in his last start shouldn't come as much of a surprise to anyone, as the immediate and distant futures of CC Sabathia and Andy Pettitte are in deep question after suffering injuries. Needless to say, New York will need to add another guy to their rotation of Greinke's caliber if they're to stay atop the AL East.

If the Brewers aren't able to lock up Greinke between now and the All-Star break, I think they'll look to deal him away. Unfortunately for the Yankees, I think they'd rather keep him and run the risk of not signing him in the offseason that take this deal up. Betances' monster 6'8", 240-pound frame has a ton of potential as so does Nunez, but I don't think Melvin will have much of an interest in Heathcott or Cervelli.

Chances this deal goes through: Not likely

With the loss of Brandon Beachy for the year, and possibly next year, the Braves are in dire need of starting pitching, especially considering the performances of Mike Minor and Randall Delgado thus far.

Greinke would be a great addition to the Braves rotation, but there could be a few snags—Greinke is a free agent after this year and will likely carry a high pricetage to re-sign. Because of that, giving up a bunch of talented prospects for Greinke will be hard to come by. The Braves definitely don’t want to get burned like they did in the Mark Teixeira trade, so they’re going to be careful here.

Prospects and/or other guys the Braves would consider relinquishing would be Triple-A Gwinnett’s SS Tyler Pastronicky, P Todd Redmond and/or OF Jordan Parraz, and Double-A Mississippi’s Zeke Spruill. Guys on the big-league team that could be considered are Anthony Vavarro and Jose Constanza. Obviously, not all of these guys will be involved in a trade, but they’re some of the ones I believe they’ll consider letting go. Julio Teheran, Evan Gattis, Todd Cunningham, Christian Bethancourt and Sean Gilmartin won’t be involved in my opinion.

My take: The loss of Brandon Beachy to Atlanta's rotation was an unfortunate one, as he was in the midst of quite possibly a Cy Young-worthy season. Now, the Braves are stuck trying to decided whether or not Tim Hudson, Tommy Hanson and Jair Jurrjens will be able to carry the load for their rotation for the remainder of the season.

If the Braves do decide to acquire a veteran power-arm before the deadline, Greinke will likely be atop their wish-list. Given that Atlanta's farm system has a number of high-ceiling prospects, the Brewers could very well be enticed by a potential deal. Problem is, if the Braves aren't willing to deal youngsters such as Julio Teheran or Christian Bethancourt, then I just don't see a viable reason for Milwaukee to pull the trigger—the Brewers will be looking for at least one top-tier prospect in return for Greinke.

Update 7/5 (9:08 AM CT): It was just recently reported that the Braves would in fact be willing to trade a number of their previously "untouchable" prospects in a deal to acquire Greinke. According to Sporting News, a deal could in fact include top pitching prospect Julio Teheran.

Jurickson Profar and Martin Perez are probably the two most untouchable prospects in the Rangers organization. Their farm system is very pitching heavy. A starting pitcher that might satisfy the Brewers is 23-year-old Neil Ramirez, who is considered one of the team’s top prospects with a high upside. A guy who could be ready to contribute fairly soon is pitcher Justin Grimm. Another young player with a lot of promise is Mike Olt, a third baseman who is having a great season for the Rangers’ Double A affiliate.

However, even for a player of Greinke’s caliber, it’s very unlikely Texas would be willing to offer both Ramirez and Olt in a deal. Centerfielder Leonys Martin might also be mentioned, but that will have a lot to do with Josh Hamilton’s contract situation.

My take: While the Rangers are absolutely loaded in the bullpen, the injury to Colby Lewis (who was the only real strikeout threat featured in their rotation outside of Yu Darvish) was a wretched one for the AL West front-runners. They may have the ability to ward off the surging Los Angeles Angels for now, but you can bet your bottom dollar that they're already in the works to upgrade their rotation—possibly through the acquisition of Greinke.

From the Brewers' vantage point, anything short of annexing at least one top-caliber prospect through trading Greinke should be considered unrealistic at this juncture. As Lance mentioned, both Jurickson Profar and Martin Perez are all but untouchable. However, I do believe that Milwaukee would be tempted by the prospect of acquiring Mike Olt, who's been nothing short of a slugger during his stay in the minors. Throwing in two arms that are fairly big-league ready such as Neil Ramirez and Justin Grimm might actually be enough to get something done.

The Boston Red Sox starting rotation isn’t in the best shape. The starters have been inconsistent, injured or just flat out bad this season—with possibly the exception of Felix Doubront—but somehow they’re still in the playoff hunt. They really need a frontline starter badly and could be interested in Zack Greinke. Greinke will enter free agency at the end of the season so Boston GM Ben Cherington would have to be sure he could lock him up long-term if a deal were to happen.

If I’m Cherington, I’d be willing to give up three impact prospects from the minor league system—possibly Anthony Ranaudo, Jose Iglesias and Jackie Bradley. I would really have to make sure that Greinke had interest in a contract extension with the Red Sox before completing a deal, though.

My take: Similar to the New York Yankees, the Boston Red Sox starting rotation has suffered through injuries, and that unfortunate reality could be the incentive they need to try and complete a deal with Milwaukee in return for Greinke.

As with many teams that would love to annex Greinke through a trade, the problem is that Boston won't part ways with the two top-tier prospects in their system. Shortstop Xander Bogaerts and RHP Matt Barnes would be two of the names Melvin would love to add to his system, but the odds that Cherington parts ways with either are slim to none. Consequently, settling for a lesser prospect in Jose Iglesias or Anthony Ranaudo doesn't seem like something Milwaukee would be interesting in doing.

For now, it looks as though the Red Sox and Brewers must look elsewhere to fulfill their needs.

Chances this deal goes through: Slim to none

The Blue Jays have become desperate for starting pitching following the injuries to potential All-Star Brandon Morrow and youngsters Kyle Drabek and Drew Hutchison as well as the general ineffectiveness of Ricky Romero. If you take a look at their probably starters for their series against the Angels it includes Carlos Villanueva and Aaron Laffey, two guys who were nowhere near the rotation at the beginning of the season.

Greinke would be a great asset for the Blue Jays and they have the assets to acquire him. There are some pieces that would most likely be untouchable (CF Anthony Gose, C Travis D’Arnaud, SP Noah Syndergaard) but there are also many plausible scenarios.

OF Travis Snider and Eric Thames are two of the main pieces that would be included in a trade. Neither are a top tier prospect anymore but definitely an extra piece that could be added.

The Jays have a glutton of SPs like Deck McGuire, Chad Jenkins that would have to be involved. Drabek’s injury makes him untradeable at this point but a young SP would most likely be the key piece.

My take: This deal makes a whole lot of sense, honestly. Not only does it satisfy Milwaukee's need for at least one top prospect to go with a couple other average ones, but it doesn't severely deplete a Blue Jays organization that many consider to be the most talent-laden farm systems in Major League Baseball.

Needless to say, Toronto needs help with their starting rotation. As Stephen mentioned earlier, injuries to both strikeout machine Brandon Morrow and Kyle Drabek—among others—has left their rotation destitute of a veteran, power-type arm. Greinke would certainly bring that to John Farrell's club.

I believe this deal will hinge on the willingness of Toronto to include Anthony Gose. He's a premier center field talent that the Brewers would jump all over if given the chance, as the Nyjer Morgan/Carlos Gomez experiment has failed epically this season and neither will be around for much longer.