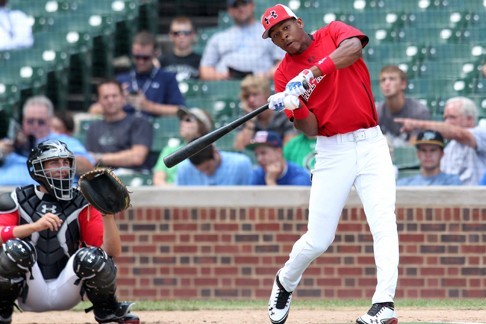 The highly anticipated commencement of Major League Baseball’s 2012 first-year player draft is finally over, with the first round and supplemental first round of action set to take place tonight at 6 p.m. ET on MLB Network.

One of the biggest storylines surrounding this year’s draft has been the clear lack of positional talent from collegiate-level prospects and the profuse abundance of high school positional players.

This year’s class boasts myriad talented prepsters that teams are likely to jump on in the early goings of the first round. Leading that crop is 18-year-old outfielder Byron Buxton—quite possibly the draft’s most intriguing prospect.

Hailing from Appling County High School (Ga.), Buxton has long been credited for having the most helium of any prospect of this year’s class—and for good reason.

The 6’2″, 190-pound University of Georgia commit has all the tools in the toolbox necessary to become a smash-hit at the big-league level. He’s shown the capacity to hit for average and power, use his tremendous speed and athleticism whenever needed and flash a strong arm from the outfield when necessary. Buxton's makeup has drawn comparisons to Tampa Bay Rays outfielder B.J. Upton.

But when it comes to drafting toolsy high schoolers, there's always a great deal of risk involved—especially when the player is projected to be a surefire top-five pick. Many former prepsters have failed to pan out and reach their potential on the diamond, whether it's because they're pushed through a system too fast or professional pitching simply overwhelms them from the get-go.

Regardless, Buxton clearly looks like a lock to go in the top three. The question many are now asking is how his career could pan out.

Here's a shortened look at what the career of the 2012 draft's most intriguing player might look like.

Ability to Hit for Power, Average

Arguably the most noticeable characteristic to Buxton's game is his bat, which has a chance to be a lethal weapon at the big league level.

While he hasn't flashed his power-potential in the form of home runs that much this spring, his power has revealed itself consistently at recent showcases around the country. Buxton finished second only to fellow prep outfielder Lewis Brinson last year at Wrigley Field at the Under Armour All-America Game.

From a mechanical standpoint, Buxton has an advanced approach at the plate. He has some of the quickest, strongest hands of any hitter featured in this year's class and absolutely crushes fastballs to all fields on a consistent basis.

That said, he still has some room for improvement with off-speed pitches. Connor Glassey of Baseball America says that Buxton will "have to adjust to quality pitching, especially breaking balls. But as an amateur, he's shown the ability to sit back on off-speed pitches and hit them with authority the other way."

Given his already advanced approach at the plate and ability to make hard contact, I wouldn't be surprised if he develops into a 20-25 home run each year type of hitter at the next level. More realistically, I'd say he's got what it takes to hit 15-20 home runs on a yearly basis in the bigs.

For as much attention as Buxton's bat will receive as his career gets started, it's his defensive aptitude that should get equal if not more attention.

With quite possibly the draft's quickest feet, Buxton covers a ton of ground in the outfield. The bulk of his experience during his high school career has come as a center fielder, though if the team that drafts him has a cornerstone center fielder already in place, it wouldn't be surprising if they groom him to play an outfield corner position.

Aside from his ability to cover, as one scout described it, "acres of ground" in center field, Buxton also boasts one of the strongest and most accurate arms of any player in the draft. He's shown to have great accuracy as an outfield arm and, as B/R's Mike Rosenbaum cites, "has been clocked regularly in the low-90s with plenty of carry."

Considering his tremendous range and arm strength from the outfield, I’d say he has the makeup to be one of the best defenders in baseball—essentially a highlight-reel waiting to happen.

Arguably the most athletically gifted player featured in this year's class, Buxton consequently possesses deadly speed that he utilizes both in center field and on the bases.

Scouts have raved over Buxton's speed since his freshman year in high school. Baseball America's scouts had this to say about Buxton's elite agility:

"Buxton's speed plays more presently, as he steals bases easily and covers acres of ground in center field. Some scouts have given him top-of-the-scale grades for both his speed (others call it well above-average) and at times for his throwing arm."

It should be interesting to see how Buxton's quickness and subsequent success on the bases translates to professional ball, where catchers will be much more advanced compared to those he faced in high school.

However, seldom do scouts describe a player's ability to steal bases as "easy." With some time in the minors, I'd say Buxton will have enough haste to tally 35-40 stolen bases per season in the bigs.

In a rather shallow draft class devoid of any real transcendent talent, Buxton has separated himself from the pack in that he clearly has the most big-league potential.

His quick, strong hands provide consistent power with a lot of room to grow. Throw in the fact that his unparalleled speed allows him to cover a ton of ground in the outfield as well as steal bases, and Buxton has the makings of a legitimate five-tool prospect.