One of the things that makes head coach Pete Carroll so good.

2009 brought another top class to USC. Most sources (ESPN, SI, Rivals) gave the Trojans the No. 3 class, including the No. 1 overall player in QB Matt Barkley.
However, with all the success Pete Carroll and his staff had with this years recruiting class, many people are critical of what happened last Wednesday on National Signing Day.
Before Wednesday, USC already had commitments from some of the best 5-star recruits in the country.
They were also in the running for other top players who would decide on Wednesday.
The news around the college football world is centered around USC not getting those top recruits (i.e. Manti Te'o and Vontaze Burfict) -- on Wednesday's big day.
It's also centered on UCLA coach Rick Neuheisel.
Being in his first year as coach for UCLA, Neuheisel has attempted to bring back a rivalry in LA between USC and UCLA, starting by saying last year, "the football dynasty in LA is OVER!"
Bold prediction for a team that ended up going 4-8 that year, is it not?
Today, he is getting a lot of praise for bringing in the 17th ranked class in the country, and for stealing three recruits from the Trojans, two of whom had committed to USC.
Maybe the dynasty is over?
No.
One of Pete Carroll's main philosophies, and a big reason of the success as of late, is centered around competition: "It's all about the competition." Roster spots on the Trojans' team are never solidified, and constant competition is necessary for success. 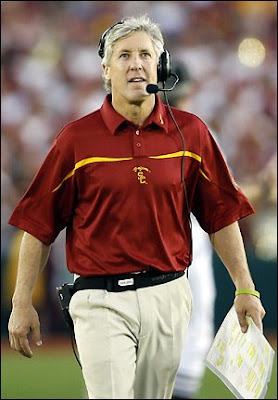 A lot of talk has also been surrounding USC regarding whether having too much talent is hurting them or helping.
I'd say helping.
Why there are probably some top blue chip recruits who are staying away from USC for the sole purpose of being a "star" at another school and playing as a freshman, USC is just fine with that. They pride themselves on having competition on the field. USC wants athletes that will try.
USC wants athletes who are humble.
USC wants athletes who will earn respect.
And USC wants the complete player.
Not to say those certain players who dodged USC are not complete players and/or will not be successful; I am just stating the facts.
When looking at the complete players and the competitive atmosphere that Carroll has brought to USC, it is no wonder they have had seven consecutive 11-win seasons, AP top-four finishes, and Pac-10 championships; not to mention three Heisman winners and two National Championships. 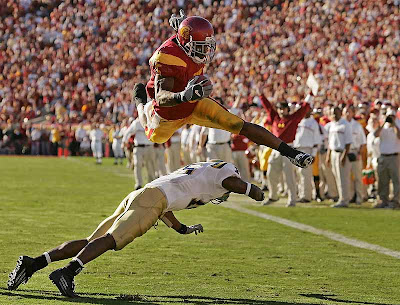 That's pretty good.
That prowess will continue as long there is that competition that engulfs the Trojan Football team.
That's why USC is doing all right after Wednesday.
Not to mention, there is a good possibility that USC could beat UCLA the next four years and win a national championship. Or two. Or more.
USC still turned in one of the better recruiting classes in the nation, and actually much better than last year's 10th rank. Also, point of reference: while USC had the 10th best last year, UCLA had the 13th.
So, yes, the separation gap between the two "rivals," if you can even call them that, got larger. That's an interesting fact when you look at the full perspective.
By all means, it definitely hurts to lose out on the guys that USC did, but they're all for the same reason: lack of competitive spirit.
And USC is just fine with that. I think they know they will be able to cope without a top recruit here and there.
You have to level the playing field somehow, right?
One last thing.
Rick Neuheisel is really going after this "ending of a dynasty" goal. One tidbit of thought. The dynasty in LA won't end for a while.
You will know it is beginning when USC gets continually out-recruited by UCLA and many of the other top programs in the country and they stop winning 11 games a year.
That will probably take a while.
So, if you are a UCLA fan, you can just take a hibernation for a while, a few decades or so, and when you wake up, maybe the dynasty will be over!
Again, probably not. Sorry.

We'd like to send you the most entertaining UCLA Football articles, videos, and podcasts from around the web.