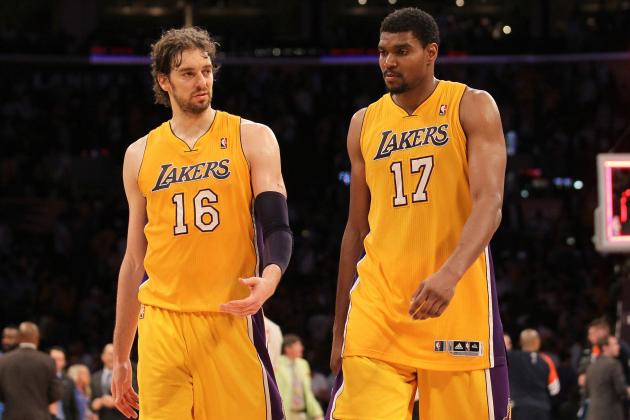 After being eliminated from the postseason, the L.A. Lakers face the ultimate dilemma of who should remain a Laker—Pau Gasol or Andrew Bynum. One is a quandary, while the other is an enigma, but the question remains difficult as ever to answer.

It is the question the Lakers front office answered once when they tried to trade Gasol for Chris Paul. But the NBA felt compelled to let this group run one more time and blocked the deal, thus sending Pau back to Los Angeles.

Now a new year has commenced, and L.A. is faced with the same question, but many are wondering if the answer has changed.

First, it is illogical and unfair to judge Gasol on his most recent playoff run. It is the entire year that should be reviewed before any decision can be or should be made. Buy the media scrutiny, and you would think Gasol morphed into Mark Madsen this season, but the numbers suggest he is the same player with whom L.A. won back-to-back titles.

Seventeen points per game and 10 rebounds per game put Gasol in select company among his peers, as he was one of only six forwards to average a double-double. But how Gasol got those numbers is what has many Lakers fans concerned.

Gasol had 4.2 field-goal attempts in the paint per game, which is the lowest in his career. What makes those numbers especially alarming are his age and years of service, neither of which indicate that he will play more aggressively on the inside anytime soon.

The Laker power forward's lack of inside presence does not take away from the fact that he is still one of the game’s most skilled big men and can contribute 10-plus rebounds a night.

Also, one cannot ignore Gasol’s play in big games. Remember, it was Gasol who gave L.A. 18 rebounds in Game 7 of the 2010 NBA Finals.

Sadly, that was two years ago. Since that point, the Spaniard has averaged 12.8 points per game and 8.4 rebounds per game in the playoffs, and while those are decent numbers, they are not what the Lakers have come to expect from Gasol.

On the other side, there is the enigma that is Andrew Bynum. If you were to ask the Lakers front office who Andrew Bynum really is—both as a player and a person—no one would be able to give you a clear answer. Bynum had his best statistical year under head coach Mike Brown, but he proved through his sporadic behavior and lackadaisical effort that he cannot be a lead player for a championship team.

Bynum’s attitude and injuries are questionable, while Gasol’s age and waning aggression are also considerable issues.

In a perfect world, L.A. would move who they wanted to move instead of who they could move. That being said, both players have great value depending on who you ask.

The Houston Rockets have desired Gasol for quite some time and put a package together once to acquire the forward. Conversely, the Lakers have turned down Hall of Famers for Bynum and seem content to ride or die with the Jersey native.

With L.A. now being forced to rebuild after two early playoff exits, the question is no longer if someone should go, but rather who should go.

The answer is simple, but the logic is complex. The Lakers have to move Bynum and keep Gasol.

Though Bynum is younger and arguably the better player right now, L.A. will get more for him than they ever could for Gasol.

The obvious trade choice for Bynum is Dwight Howard, which will be discussed ad nauseam. But the Lakers cannot think Howard or bust; they have to be willing to look at young players who, paired with Gasol and Bryant, could flourish.

Howard is the big name most often heard around Laker land, but secondary options like Brook Lopez and DeMarcus Cousins could be even better. In addition to bringing more talent in the paint, each player will come with additional role players that the Lakers desperately need.

The Lakers are not just one player away. They are a point guard, bench and small forward away from being considered title contenders again, and Bynum can get them at least one star and another worthy starter.

Bynum is a quality big man who has proven that, given health and motivation, he can be dominant. The problem is, championships are not won on ifs; they are achieved through certainty and desire.

Gasol has proven when the chips are down he will give you everything he has. Bynum, on the other hand, will give you what he feels is needed, and that has not proven to be enough.