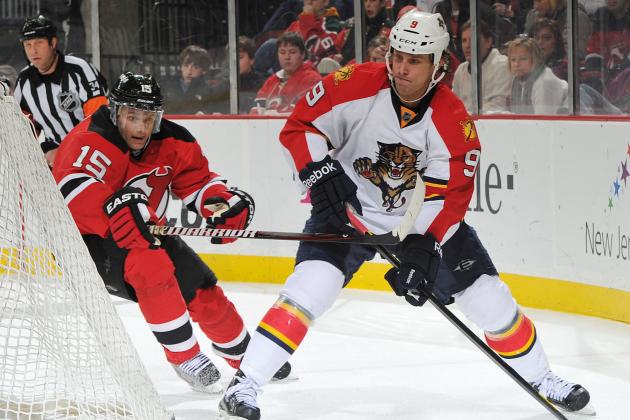 As the opening round of the 2012 Stanley Cup Playoffs begins, a careful look at each team's strengths and weaknesses and how they match up against one another helps frame each series.

Here are the five biggest matchups to look for as the third-seeded Florida Panthers take on the sixth-seeded New Jersey Devils in the Eastern Conference Quarterfinals of the 2012 Stanley Cup Playoffs.

The goaltending matchup in this series will undoubtedly be one of the most important in deciding who moves on to the next round.

Both Jose Theodore and Martin Brodeur are veteran goaltenders with an abundance of NHL regular season and playoff experience, and both head into the postseason having rebounded after relatively weak 2010-2011 seasons that ended with both of their clubs missing the playoffs.

One aspect of the goaltending matchup that isn't getting enough attention, however, is a possible goalie controversy in Florida. While Theodore has played well enough to maintain the "starter" label all season long, Scott Clemmensen has also performed admirably for the Southeast Division champions, particularly in his one game against the Devils on February 11.

In that game, Clemmensen made 27 saves in a 3-1 Florida victory at New Jersey. Including that victory, the so-called backup goaltender for the Panthers is 4-0 lifetime against his former team, the New Jersey Devils. He finished the regular season with a 14-6-6 record, a .913 save percentage and a 2.57 GAA.

As many hockey fans and pundits have claimed, this series might actually be one where the higher seed is considered the underdog. In the case of the goaltending matchup, I have to give the edge to the Devils, unless Kevin Dineen decides to start Clemmensen in place of Theodore.

Edge: TIE (NJ if the Panthers start Theodore; FLA if they go with Clemmensen).

The speedy, gritty winger with a knack for scoring goals while chewing on his mouthpiece has been a revelation in South Florida this season.

After bouncing from Chicago to Toronto to Philadelphia after winning the Stanley Cup as a secondary scorer and physical presence for the Chicago Blackhawks in 2010, Versteeg has finally landed in what seems to be a permanent, top-line role for Kevin Dineen's Panthers.

The confidence the Panthers have shown in him has helped him blossom offensively while skating with Stephen Weiss and Tomas Fleischmann for much of the regular season. Versteeg finished the season with a respectable 54 points (including 23 goals) in 71 games played, good for third in overall team scoring.

In order for the Panthers to have success against the New Jersey Devils, Versteeg will have to continue to carry the offense. In the four-game season series this year between the two clubs, Versteeg scored five of his team's 12 goals, including the game-winning goal against the Devils in New Jersey on February 11.

If New Jersey can effectively shut down Florida's top line, particularly Versteeg, the Panthers will almost certainly have a difficult time putting enough pucks behind Martin Brodeur in order to win a seven game series.

Special teams will be paramount for both teams heading into this matchup.

The surprising Florida Panthers rode their offseason acquisitions Kris Versteeg, Tomas Fleischmann and Brian Campbell to one of the strongest power plays in the league, finishing seventh at 18.5% for the regular season.

However, the New Jersey Devils clamped down on opposing power plays this year, finishing first on the penalty kill, killing off 89.6% of power plays.

Something has to give in this matchup. If the Devils stay disciplined and out of the box and continue to kill penalties with that kind of efficiency, it will be an astronomical task for the Panthers to score enough goals at 5-on-5 in order to win a seven game series. They scored only 127 5-on-5 goals for the entire season, which is third worst in the NHL. They need their power play to score in order to be successful.

New Jersey also scored the most 4-on-5 goals in the league this season with 13.

If Florida can be careful in their puck distribution with the man advantage and find shooting lanes against the Devils, the Panthers might be able to find a way to beat the NHL's most efficient and most lethal penalty kill.

But the odds are not in their favor.

The trio of Versteeg, Weiss and Fleischmann has played very well for the Panthers this season and is a big reason why the Panthers claimed their first Southeast Division title in franchise history.

However, the numbers don't lie—the aforementioned Florida trio has combined for 172 points. Kovalchuk and Parise have scored 152 between just the two of them. Add in Henrique, and that total jumps to 203. Add Elias instead, and it jumps to 230.

Ilya Kovalchuk, in particular, can be a nightmare to defend, and not just because of his skill on and off the puck in the offensive zone—he takes a lot of double shifts, making it difficult to deploy one shutdown defense pairing against him, especially when the Devils have home ice.

Kovalchuk led the Devils in time on ice this season at 24:26, which is also good for 18th in the NHL amongst all skaters and first overall for forwards by almost two full minutes per game. It will have to be a team effort from the Florida Panthers defensemen in order to keep the top line for the Devils in check.

Conversely, the Florida Panthers rely on a more balanced scoring attack. This team is built not unlike Western Conference teams that have experienced regular season success, such as the Nashville Predators and Phoenix Coyotes. They stress team defense and reliability in the defensive zone and spread their scoring across all four lines.

On any given night, the Panthers can get an offensive outburst from the top of their lineup down to their bottom. Rather than two true scoring lines and two checking/defensive lines, as is often the paradigm in the NHL, the Panthers expect all four lines to contribute offensively while defending well at the same time.

Compare the top line for New Jersey with that of Florida—Kovalchuk, Elias and Parise are a combined minus-23 on the year, while the trio of Versteeg, Weiss and Fleischmann are plus-2.

That said, I still have to give the edge to the team with the elite talent up front when it comes to the playoffs.

Peter DeBoer was fired by the Florida Panthers on April 10, 2011—almost exactly one year ago, after the Panthers missed the playoffs for their 10th consecutive season, three of them under DeBoer's supervision. In his final year, the Panthers finished dead last in the Eastern Conference and third worst in the NHL.

Kevin Dineen was hired to replace DeBoer, who took a job in July to coach the New Jersey Devils, who had struggled under coach John MacLean and just barely missed the playoffs after the team surged back from an abysmal start with the help of coaching legend Jacques Lemaire during the 2010-2011 NHL season.

This playoff matchup has more than just a spot in the next round on the line. While both coaches will certainly downplay their own significance in the series, each coach will definitely be trying to prove to fans, their respective GMs and themselves that they are the right men for the job.

The amount of roster overhaul that new GM Dale Tallon underwent in the offseason leaves little on the Florida Panthers roster that Peter DeBoer would recognize.

But bragging rights and pride are still up for grabs for the winner of this series, and a win in this matchup will mean more a little more to DeBoer.

Follow New Jersey Devils from B/R on Facebook and get the latest updates straight to your newsfeed!

We'd like to send you the most entertaining New Jersey Devils articles, videos, and podcasts from around the web.