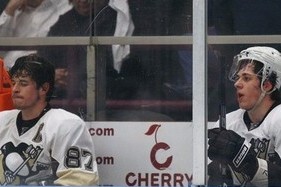 Crosby is one of the best ever, and if the goalie equipment wasn't so much bigger these days he would probably be challenging some of Gretzky's single season records.

Unlike Gretzky, he plays a great all-around game. Unlike Gretzky, Crosby does not avoid contact like the plague (although he does get the preferential treatment from the refs that Gretzky was accustomed to), rendering him more susceptible to injury, so even if the goalie equipment was as small as it was before Bettman (bigger goalie equipment helps facilitate artificial parity) became commissioner, he still wouldn't have a chance at Gretzky's career records.

I just wish he would stick to playing hockey and stop being such a wimp.

Last night against the Flyers, after the whistle as they were skating to their respective benches, he cross-checked Schenn in the back and Schenn returned the favor only harder (I believe retribution should always be greater than the original offense).

Crosby whined to the refs about it. After the game he and Blysma whined about it to reporters in the post-game conference, calling it a blatant cheap shot, but it was Crosby's initial cheap shot that led to the one by Schenn.

Typical poor sportsmanship by Crosby and Malkin precipitated a brawl near the end of the game. Even if they beat the Flyers in the first round, if they keep acting like babies they are going to be too beat up to beat anybody else because they're poor sportsmanship and dirty play will a provoke a more physical series which gives the Flyers an advantage they wouldn't have otherwise had.

I, for one, will be cheering for the Flyers in this one.

Crosby and Malkin are two of the best players in the game, and with Datsyuk in the conversation, they are arguably two of the three best. They are role models for kids and ambassadors of the game. They really need to grow up.

We'd like to send you the most entertaining Pittsburgh Penguins articles, videos, and podcasts from around the web.