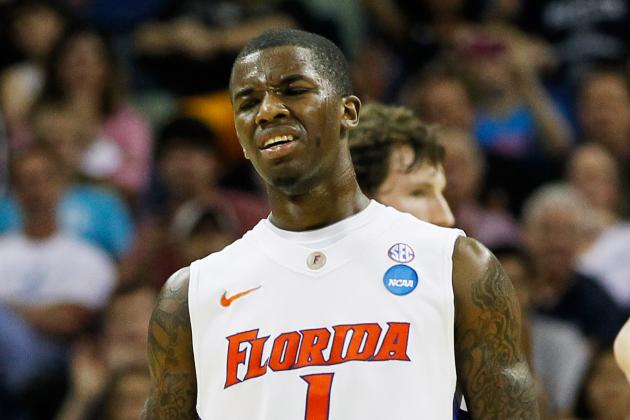 Selection Sunday always leaves some teams ecstatic and others thoroughly disappointed as the NCAA tournament approaches.

This year was no exception. A few teams were snubbed from the field, others received lower seeds than expected and some should feel very lucky about the selection committee's decision.

Here's a look at Selection Sunday's 10 biggest winners and losers.

For your printable bracket for the 2012 NCAA tournament, click here.

In each of its past three NCAA tournament appearances, Vanderbilt has been upset in the first round—once as a No. 5 seed.

The No. 12 over No. 5 seed upset is very common, and Vanderbilt drew a challenging Harvard squad. The Commodores are the better team, though, and they should win as long as Harvard doesn't dictate a slow pace.

However, we've seen Vanderbilt fall to inferior competition in the past. Even if the Commodores win, they'd most likely face Wisconsin and Syracuse in the following two rounds.

You'd think they would have appreciated more of a reward for topping Kentucky for the SEC championship.

Despite having a mediocre resume and losing in the MAAC semifinals, Iona snuck into the tournament field. The Gaels suffered resume-killing losses to Hofstra, Manhattan and Siena, and they couldn't topple Purdue in November.

On top of earning an at-large bid, Iona was also lucky enough to draw a navigable path in the early rounds.

The No. 14 seeded Gaels will face BYU in Tuesday's play-in game. Though BYU is more defensive-minded than Iona, Scott Machado can certainly lead the Gaels' offense past the Cougars.

Marquette awaits the winner on Thursday. The Golden Eagles' lead duo of Darius Johnson Odom and Jae Crowder will pose a threat to Iona's feeble defense. However, Iona can run with Marquette.

Should the Gaels upset the Golden Eagles, they wouldn't even face a BCS school in the following round. Murray State and Colorado State are good, but both teams would be easier to beat than Marquette.

With Iona sneaking in, some other team was relegated to the NIT. That team was Drexel, which went 27-6 and held a 19-game winning streak.

The Dragons' No. 71 RPI and lack of a quality non-conference win most likely were the deciding factors—Iona stood at No. 41 in the RPI.

Still, though, Drexel could feel snubbed. The Dragons started 2-4 but finished 27-6. There were few teams hotter than them towards the end of the season.

A 12-6 Big East bubble team is extremely rare, but without any quality wins, South Florida found itself as one of the last teams in the field.

Despite having ample opportunities against top competition, the Bulls went just 1-8 against Top 50 RPI teams. Their win at Louisville on Feb. 29 probably persuaded the committee to call their name—without it, South Florida would have been 0-8 against Top 50 RPI squads.

Either way, the selection committee easily could have left the Bulls on the periphery.

While luck went one Big East team's way, it didn't exactly find another.

Yes, Georgetown received a No. 3 seed. However, the Hoyas inherited a very difficult road through the Midwest Region.

First, they'll face Belmont, which boasts one of the best offenses you don't know. The Bruins rank No. 11 in Kenpom's adjusted offensive efficiency, so if Georgetown finds itself mired in one of its scoring droughts, Belmont could advance.

A potential third-round matchup against either San Diego State or NC State also won't easily translate into a win for the Hoyas, but if they should advance, they'd face Kansas.

Early in the season, Georgetown nearly beat the Jayhawks, but KU has become a much better team since then while Georgetown hasn't been as impressive.

West Virginia slumped down the stretch, but the Mountaineers still managed to secure a No. 10 seed.

They also drew a favorable first-round matchup in Pittsburgh, which is an easy trip for the Mountaineer faithful.

Other than the intense Robert Sacre, Gonzaga's players are somewhat soft and won't be able to bang with Kevin Jones and Deniz Kilicli down low. The Bulldogs will need Elias Harris to come ready to play and Kevin Pangos and Gary Bell ready to shoot. Otherwise, West Virginia should win.

In the next round, the Mountaineers would, in all likelihood, face Ohio State. Once again, their size could help them upset the Buckeyes.

Though Xavier hasn't been the same since the brawl with Cincinnati, the Musketeers seem to be regaining steam entering the tournament. Plus, they have Tu Holloway, one of the most fearless players in the field.

Notre Dame, on the other hand, burst onto the scene by winning nine consecutive Big East contests. However, the Fighting Irish don't have the same firepower as the Musketeers, who boast a few potent offensive weapons.

Should Notre Dame advance, though, Duke would be on slate in the third round, and the Blue Devils should overwhelm the Fighting Irish at every position.

Though NC State is a No. 11 seed, the Wolfpack inherited a very winnable matchup against San Diego State.

The Aztecs are good, but they have been exposed by inferior teams like Air Force. While NC State isn't as formidable defensively, its offense is definitely better than San Diego State's.

Murray State probably would have been a more favorable No. 6 seed for NC State, but the Wolfpack will gladly accept their first challenge.

Despite being ranked in the top 20 for most of the season, Florida will be a No. 7 seed in the Big Dance. The Gators can thank their No. 26 RPI and a couple of bad losses for that.

Not only did the Gators receive a low seed, but they'll also have trouble advancing to the Sweet 16.

Beating Virginia won't be easy, as the Cavaliers hold opponents to 29.5 percent shooting from beyond the arc. If the Gators can't convert their threes, they'll be ousted on Friday.

Of all the potential No. 2 seeds, Missouri is actually the best matchup for Florida. Neither team has excessive size, neither is particularly good on defense and both teams are guard-oriented.

If you're looking for a No. 1 seed that could lose early, look no further than Michigan State, which could face a surging Memphis team in the third round.

The Tigers have played extraordinary defense this season, and what was a youthful team last season has clearly matured.

Memphis will first need to advance past St. Louis, but the Tigers' athleticism advantage should help that come to fruition.

Against Michigan State, Memphis has just as many—if not more—athletes. If Tarik Black can avoid foul trouble and remain down low, the Tigers may even have an advantage on the perimeter.