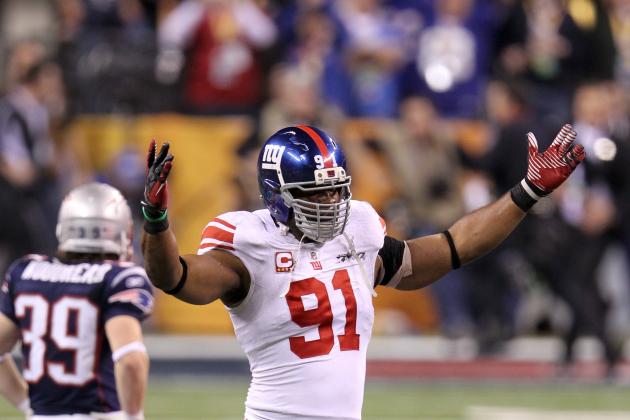 Andy Lyons/Getty Images
Justin Tuck (91) is considered the defensive leader of the Super Bowl Champion New York Giants. Now heralded as one of the most dangerous defensive players in the game, Tuck dropped to the 3rd round of the 2005 draft.
1.1K
Reads
1
Comment

The New York Giants have won two Super Bowls since the dawn of the new millennium. This feat is thanks in large part to the quality early round selections that they acquired, including Eli Manning and Hakeem Nicks.

However, as free agency nears, teams are focused on how exactly their club will both enhance the current roster and replace departing veterans.  For those who will not look to make a splash in free agency, their attention will turn to the NFL Draft.

For the next two months, football fans will be saturated with scouting breakdowns and projections that seem to centralize on the potential early round selections alone.

While I am in no way calling into question the analytics and expertise of those that study the draft, history has shown us that there is more to building a winning roster than selecting a high profile rookie who has yet to prove himself.

The draft is seven full rounds. The spring's commotion will be all about who is selected early but the winter could be defined by those who were barely noticed, if noticed at all.

Here is a quick look at five Giants from the 2000s that were steals as rookies.

Over the past week, speculation has begun to swirl regarding Blackburn’s future in the NFL.

Despite the fact that the Giants were desperate for a veteran linebacker presence heading into Week 1 of last season, they declined to re-sign him.  Instead, New York opted to move forward with four rookie linebackers (two of them drafted). With Jonathan Goff on IR, Greg Jones got the start in his NFL debut at MLB while a proven Giants veteran sat home.

The Giants weren’t the only team to overlook the former special teams captain.  Blackburn remained a free agent until the first week of December.  He was eventually brought in by his former team to take over for an injured Mark Herzlich.  His impact was immediate and Blackburn would go on to be a key contributor to the Giants defense throughout the Super Bowl run.

What makes Blackburn’s story more compelling is that he started his NFL journey as an undrafted training camp body.  Eventually earning the role of Antonio Pierce’s understudy, Blackburn equaled his predecessor’s feat of rising from undrafted player to starting MLB on a Super Bowl winning squad.

After beating the odds and essentially making the Giants 2005 final roster as a walk on, Blackburn saw a great deal of playing time.  He made his first start as a rookie in December of ’05 after a Pierce injury and would consistently contribute on special teams throughout his career.

Now as free agency nears, Blackburn has attracted other suitors and could be in moderate demand next week.

Kevin Boss arrived in New York via the fifth round of the 2007 draft.  This was Jerry Reese’s first draft as GM and it would be an overall success.  All but one of Reese’s picks would be a significant contributor to the ‘07 Super Bowl run.

Jeremy Shockey was currently entrenched as the starter during Boss’s rookie year and at first, it did not appear that the young TE would have an opportunity to unseat the Pro Bowler in the near future.  Still, Boss’s 6’ 6” frame caught the Giants eye and he made the final roster as the second TE.

In a December matchup against Washington, Shockey suffered a broken leg and had to be carted from the field.  He would never suit up for the Giants again.

Thus, Boss stepped into the starting role earlier than expected and managed to haul in his first career touchdown on the very same night.

Kevin would not see action the following week in Buffalo, but he would be the starting TE for the Giants throughout the 2007 postseason.  He is credited with helping to kick start an idling Giants offense with a 45 yard reception in Super Bowl 42’s second half.  Later on the drive, David Tyree would score the first Giants touchdown of the contest.

Boss’s early contributions gave the Giants front office the confidence it needed to trade away their disgruntled former star.  Shockey would be shipped off to the Saints before the start of the 2008 training camp.

It would take until Week 3 of the 2008 season for Boss to register his first catch and rumors began to circulate that perhaps New York would be interested in acquiring Tony Gonzalez via trade.  In the end, Jerry Reese stuck by his former draft pick and Boss remained a significant part of the Giants' offensive attack through the 2010 season.  He would leave via free agency in order to return home to the west coast and play for the Raiders.

David Diehl is currently not high on many Giants fans lists right now.  A versatile lineman, Diehl has played every position but C for New York since being selected in the fifth round of the 2003 draft.

Diehl has drawn heat because he has grown inconsistent as a LT.  On the historic final offensive drive for the Giants in Super Bowl 42, Diehl was clearly outmatched by the New England defensive line.  On more than one occasion, including the “helmet catch” play, Diehl is the reason that Eli had to contend with significant pocket pressure.

Also, while considered an upgrade over Will Beatty, Diehl’s second tour of duty at LT had its rough spots in ’11 as well.

However, struggles or not, Diehl was the starting LT on two Super Bowl winning squads.

He rarely misses time due to injury and is one of the hardest workers in the Giants locker room.  Considering that he was selected deep into the draft, Diehl was truly a value selection for New York.  He has been a key member of their offensive line and a reliable starter for nearly a decade.

There was speculation that he might be a cap casualty heading into this offseason, but with Kareem McKenzie reportedly being told to prepare for unemployment, Diehl is now the favorite to take over the RT spot.

This spot was a close call between Diehl and Justin Tuck.  Tuck, who is one of the most revered active players in the NFL has indeed exceeded his 3rd round selection.  However, considering his earlier pick and his ability to rotate in or out thanks to considerable DE depth, Tuck concedes this spot to Diehl.

In 2006, the Giants were surprised with the news that their star RB Tiki Barber would be retiring after only 10 NFL seasons.  To replace him, the Giants elevated Brandon Jacobs to the role of feature back, and brought in Reuben Droughns via trade to compliment him.  They also brought Derrick Ward into their ‘07 training camp.  Ward had been a reserve RB on the Giants since 2004, but had yet to make any type of impact for the offense.

Joining these three backs would be seventh round pick Ahmad Bradshaw. Bradshaw, due to injury and the surprisingly elevated play of Ward, would not break onto the scene until late in the year.

After Ward suffered a broken leg, Bradshaw was given an opportunity and in a playoff-clinching win, he burst free for an 88 yard run against the struggling Bills. Throughout the postseason, he solidified himself as a top two back in the Giants rotation and was key member of the offensive attack.

After the Super Bowl victory, he would once again take a backseat.  With the return of a healthy Ward, Bradshaw was relegated to third string and was granted mop up duty in 2008. He sat behind Jacobs and Ward who each eclipsed 1,000 yards on the season.

In 2009, the former final round selection returned to prominence and accrued 778 yards and seven touchdowns. In 2010 he established himself as the feature back in the Giants stable (helped by a sharp decline in Jacobs’s production) and rushed for 1,235 yards.

His numbers took a significant hit in 2011 thanks to nagging injuries, but his impact was still felt.  Relatively healthy, he helped to ice several late season games and “accidentally” scored what would be the game winning touchdown against the Patriots in Super Bowl 46.

The Giants will continue to rely on Bradshaw as their main rushing threat in 2012.

Victor Cruz went overlooked by all 32 teams throughout seven full rounds during the 2010 NFL Draft.  Eventually given an opportunity to report to camp, Cruz signed on with the Giants two summers ago.

He now has more single season receiving yards than any other Giant in history (1,536).

Cruz’s rookie year was a washout thanks to a nagging hamstring injury that eventually landed him on IR.  However, he made quite the impression during a preseason matchup against the Jets where he hauled in three touchdown passes.  He was brought back to compete for a spot on the 2011 roster.

With Steve Smith lost to free agency, the Giants were initially depending on Domenik Hixon or Brandon Stokely to compliment Hakeem Nicks and Mario Manningham.  When Hixon was lost for the season during a Week 2 victory over St. Louis, Cruz got an opportunity to turn heads the following week.

He answered the call, scoring two TDs and racking up 110 yards receiving.  As the season wore on, Cruz gained momentum.  He finished with 82 regular season receptions and 10 TDs (counting his score in the Super Bowl).

While what makes Cruz marketable is his knack for the big play (see: 99 yard catch-and-run against the Jets) or his acrobatic catches (see: touchdown vs. Seattle), it is his versatility that makes him one of the most dangerous receivers of all time.

When he is not being used as a deep threat, Cruz thrives as a possession workhorse.  He is both a reliable target when the chains need to be moved, and good option to heave a deep ball to.  Though he was second on the depth chart, Cruz would shift to the slot when third receiver, Manningham would enter the game.

A player that never heard his name called on draft day managed to shatter the Giants record for single season receiving yards in only his second year.  If there was ever a case to be made that discredited the “science” of the draft, Cruz would need to be included in it.

Follow New York Giants from B/R on Facebook and get the latest updates straight to your newsfeed!

We'd like to send you the most entertaining New York Giants articles, videos, and podcasts from around the web.