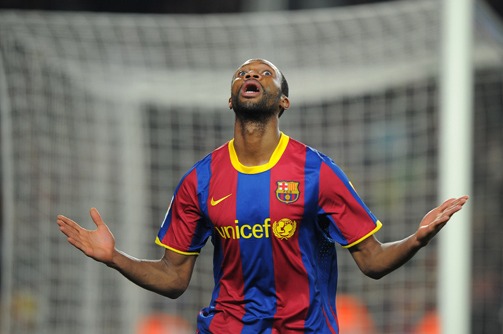 Barcelona have been a poor selling club over the past decade. Players like Rafael Marquez, Thierry Henry, Samuel Eto'o, Ronaldinho and Deco have all left the club for a variety of reasons. Most recently, Aliaksandr Hleb had his contract rescinded at the end of a three-year-long fruitless search for a new club.

This summer could bring with it its own set of players who are set to leave the Camp Nou. Some may not fit into first-team plans. Some lack crucial abilities required to play at Barcelona. And some are just not considered good enough by the technical staff.

Here are the five players most likely to leave the Camp Nou in the summer transfer window.

Barcelona's workmanlike midfielder Seydou Keita is odds-on to leave the club in the summer.

Keita's role this season has diminished considerably with the rise of Thiago Alcantara, and the purchase of Cesc Fabregas.

And now that the Catalans have promoted Jonathan dos Santos and have also handed a few starts to Sergi Roberto, Keita's exit looks almost obvious.

There is no lack of suitors for the Malian midfielder, with Liverpool and Newcastle United both ready to offer in the range of £5 million, a healthy price when one considers Barcelona's inability to get rid of players on permanent deals (Aliaksandr Hleb, Keirrison and many more), and Keita's age of 31 years.

Josep Guardiola loves Keita, having famously referred to him as one of his two niñitas (little girls), the other being Javier Mascherano. However, even he will be hard-pressed to find reasons to deflect Liverpool's and Newcastle United's reported interest.

Another backup player who could leave the Camp Nou is Dutch attacking midfielder Ibrahim Afellay.

Afellay suffered a severe long-term injury at the start of the 2011-12 season, which has kept him out of action till date. He has begun to train again, but doubts have naturally been cast over the possibility of his return to first-team action.

Isaac Cuenca and Cristian Tello have shone for Barcelona, and both play along the wings, which is where Afellay normally features for Barcelona. The technical staff may choose to dispense with Afellay's services to give the two starlets more playing time.

Barcelona also have Gerard Deulofeu waiting on the wings. Deulofeu would reap the maximum benefits of a potential Afellay exit, especially in Copa del Rey matches which is where Barcelona's promising youth players normally get their break.

Afellay's exit looks likely because of his injury and because of the talent Barcelona have waiting to take over.

Few know, but Andreu Fontas was actually promoted to the first team for the 2011-12 season. He made only six first-team appearances till January before being stretchered off with a ligament injury in a Copa del Rey fixture against Osasuna.

Fontas had not impressed on his sporadic appearances for the first team. His Achilles' heel is his severe lack of speed and agility, which makes him unsuitable to Barcelona's high-line defense.

While he makes it up to an extent with his aerial ability, height and physicality, Fontas is not well-suited to become a starter for Barcelona's first team under their current system.

Possibly the biggest indicator of Fontas' impending exit, however, is the players Barcelona have decided to promote for 2012-13. Central defender Marc Muniesa and part-time central and right-sided defender Marc Bartra are among the La Masia graduates who will make the jump to the first team.

With so many young defenders in the squad, and the lack of faith shown in Fontas so far, it will be difficult to imagine him in Blaugrana colours next season.

It is easy to forget a player who has never made a single official appearance for a club. Henrique is one of two players signed as part of a disastrous agreement with Brazilian sports marketing agency Traffic.

Signed from Palmeiras in 2008 for a reported price of €8 million, with an extra €2m in bonuses, Henrique then spent three consecutive years on loan at Bayer Leverkusen and Racing Santander, before being loaned out yet again to Palmeiras.

The young Brazilian is unlikely to ever break into the Barcelona first team. Gremio have reportedly shown an interest in his situation and could offer him an escape route in the summer.

Keirrison was also a part of the ill-fated deal with Traffic, joining former Palmeiras teammate Henrique in what he probably envisioned was a dream move to Barcelona during the 2009 summer transfer window.

Keirrison's transfer was not a cheap one, valued at €14 million plus a bonus of up to €2 million. However, he has been unable to come close to a first-team role at Barcelona.

Barcelona have sent out Keirrison to clubs as varied as Benfica, Fiorentina, Santos and Cruzeiro on short-term loan deals. As of March 2012, it seems unlikely that he will ever make a return to the Camp Nou and wear a Barcelona shirt during an official game.

News of reported interest for the Brazilian is rather muted, with no clubs on the horizon as of this moment. However, it will make little sense to keep him at the club for the 2012-13 season. In all likelihood, he will leave during the summer window on either a permanent deal, or yet another loan spell.