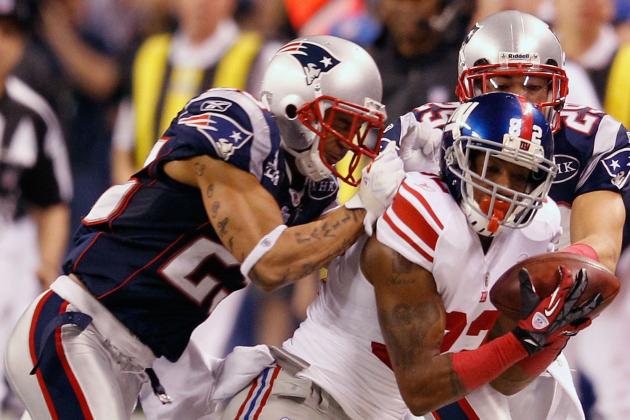 For all the comparisons being drawn to Mario Manningham’s sideline “miracle” catch and David Tyree’s iconic helmet grab, there is a looming similarity that might not conjure up feelings of nostalgic bliss.

Like Tyree, No. 82 may never again play a post-Super Bowl snap in blue.

Like a parent having “the Talk” with his or her teenager, no fan enjoys discussing a key free agent’s possible departure.  You can avoid it and you can hide, but at the end of the day, Manningham may just slip through Jerry Reese’s Super Bowl ring adorned fingers.

Manningham has said that he would like to remain in New York despite being relegated to the third slot on the depth chart.  From that “reserve” spot, the former Wolverine sustained a significant drop in regular season production.  He fell one catch shy of 40 receptions and accrued nearly half of 2010’s yardage total with 523.

But the falloff in stats can be blamed in part on a tweaked knee that haunted Manningham until the postseason. After convalescing, he recorded 13 postseason catches, a TD in each NFC playoff game and the key grab on New York’s final Super Bowl drive.

But the worst case scenario for the still young receiver is finishing his career with a Super Bowl victory notched on his bed post.  With teams like Chicago and Cincinnati intending to court him, Manningham might follow the money, regardless of his new home’s readiness to contend for a title.

The Giants will try and field a generous offer, but with two other receivers that eclipsed 1,000 yards this season, there might not be enough money to go around.

Victor Cruz is currently making paltry numbers, but that is expected to change in the near future.  Hakeem Nicks is still playing out his rookie contract, but thanks to his status as a first-round pick, he is receiving a more appropriate salary.

He too will require a sizeable contract when it comes time to re-sign.

As evidenced by Steve Smith and Osi Umenyiora, players often get only one chance to cash in on a blockbuster deal. Ill-timed injuries cost both of those men that opportunity, and while Smith still has time to prove himself, the aging Osi has never again been worth the money he could have negotiated for in 2009.

With Mario in the enviable position of being at the top of his game heading into his first shot at free agency, he is going to want to cash in.  Frankly, retaining the entire trio of Cruz, Nicks and Manningham is just not practical.

So let’s brace for the bad news, and take a look at a possible replacement.

Devin Thomas’s special teams play allowed him to significantly contribute to New York’s Super Bowl run, but his abilities as an offensive asset will not be overlooked in camp.  Thus far, Thomas has yet to better 25 receptions in a single season despite the fact he was a highly touted draft pick by Washington in 2008.  He’s nifty and quick though, and as I mentioned before, his punt coverage skills are what help him stand out.

It is that ability that will likely keep him around regardless of his spot on the WR depth chart. He won’t blow anyone away like Manningham can, but he might be a serviceable third option in a pinch.

Two blown right knees ago, Domenik Hixon could have been a viable candidate to replace Manningham.  The German born receiver has notched just four catches over the past two seasons thanks to early tears of the same ACL.

Hixon’s lack of good fortune helped facilitate the rise of Victor Cruz.  After showing flashes of potential during his first three seasons as a Giant, Hixon was expected to make the final roster as their leading Kick/Punt returner during Cruz’s rookie campaign.  Despite a show-stealing performance against the Jets during the annual preseason matchup, it has been documented that Cruz made the final roster by the skin of his teeth.

Had Hixon not been placed on IR, Cruz would have been the odd man out and the Giants would have had to release their rights to him.

Fast forward to 2011, and Cruz has once again made the squad.  Still buried on the depth chart he is set back even further by the sudden signing of veteran slot WR, Brandon Stokely.  Following the second tear to Hixon’s ACL, Cruz finally saw some playing time in Week 3 against Philadelphia.

The rest is history.

Also history, is Hixon’s time in New York.  The once promising offensive weapon would now need to successfully recover from extreme damage to his knee in order to contribute to a Super Bowl winning roster.  With Jerrel Jernigan the early favorite to win 2012 return duties, there won’t be room for Hixon on the final 53.

Could Jernigan emerge as a receiving threat?  It would be unwise to rule him out.  He frustrated fans during the preseason by managing to drop three punts in one game.  He was unable to make an impact on offense during his rookie season, but Reese is in love with his speed.  As the year wore on, Jernigan did manage to show some progress as a returner as well.  He’s going to get a shot.

Whether or not he’s a legitimate option, is yet to be seen.

Mark Clayton was resigned to the training camp roster for 2012, despite finishing ’11 on IR.  Coughlin loves his work ethic.  However, he is used primarily as a blocker on run plays and returns.  His age and his lack of durability work against him. If he even makes the final roster, I will be thoroughly surprised.

Are there options in free agency?

Of course there will be.  But the Giants are not going to break the bank for anyone.  Their best possible offer will go to Manningham.  Whoever they would chose to bring in would need to come at a value price and be willing to be a part of a system that spreads the ball around.

Should Laurent Robinson become available, that would be something to keep an eye on.  He thrived in a three prominent receiver system and being as he wasn’t a Super Bowl hero, he might come at a slightly more affordable price.  His 54 receptions for 858 yards would certainly be welcome in New York.

My favorite (and by favorite I mean “most likely”) replacement for Manningham’s theoretical departure is Jernigan.  His presence on the roster lowers the chances of bringing in another rookie in the draft, and he did show tangible improvement by the postseason.  Should he have a breakout sophomore campaign, it would be only fitting that he should replace Mario.

This will definitely be an interesting storyline to watch as we get close to March 13th.