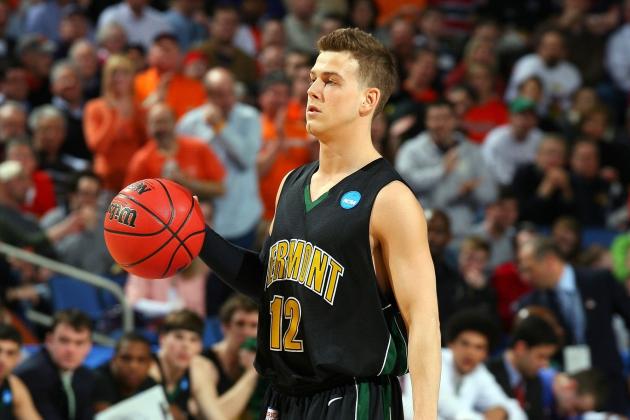 The America East Conference tournament will be held at the high seed with dates ranging from March 1- March 10. The America East traditionally has been dominated by Vermont but has a new team at the top of the conference this year. Who are they and what do they have to offer? Let's take a look.

Stony Brook spent most of the last decade in the America East cellar, but the Seawolves have turned things around. After winning the regular-season crown in 2009 and 2011, it looks like Stony Brook may be establishing itself as something more than a one-year flash in the pan. Stony Brook has won 17 of its last 19 games and looks to turn that momentum it into an NCAA Tournament berth.

The Vermont Catamounts have won won 14 of their last 16 games. While they have been playing well, the Catamounts did hand Binghamton its only win on February 21, a loss that deprived Vermont of the conference regular-season title. If focus is an issue, Vermont could struggle to win three games in three days.

Vermont did sweep both Maine and Boston, the likely teams they would face before advancing to the title game. If the Catamounts meet Stony Brook, it would be an epic battle of No. 1 versus No. 2 at Stony Brook, where Vermont lost by six earlier this season.

Who Will Win the America East Conference Tournament?

Who Will Win the America East Conference Tournament?

The Terriers of Boston finished third in the America East and are the only team besides Stony Brook and Vermont with a good chance to win the conference title. The Terriers won games against teams below them in the conference standings, but they were a combined 1-3 against Vermont and Stony Brook. Boston is the defending conference champion and is looking for its second consecutive chance to dance.

Albany slipped into the No. 4 spot with nine conference wins. The Great Danes are looking for their first NCAA Tournament bid since 2007. They will face off with New Hampshire in the first round, a team they split with during the regular season. With the sensational play of Gerardo Suero, (21.7 ppg), Albany could make a run as it is often one guy who carries a team through these tournaments.

New Hampshire is the other side of the No. 4 vs. No. 5 split. The Wildcats have won five of their last six games and have jumped three spots in the conference standings in the past two weeks. If New Hampshire continues to play inspired basketball, they too could be a surprise team out of the America East.

Hartford is one of the better stories in the conference this year. After starting the season 0-13, Hartford won eight of its last 16 games to earn the No. 6 seed. Statistically, Hartford is one of the worst offensive teams in the nation (324th in points per game). But stats don't matter because Hartford looks to use its  slow pace to lull teams to sleep. The Hawks could make it interesting against Boston, but I don't see them being a real threat to win the tournament.

The Maine Black Bears are paired against a veteran Vermont team that swept them in the regular season. In a state more known for hockey, Maine looks to try to impress its hoops followers by knocking off Vermont in the first round. Like Hartford, I don't see Maine making it past Saturday.

In some ways, the UMBC Retrievers have been more disappointing than Binghamton. Eighteen of UMBC's 25 losses have been by double digits. Better luck next year!

Binghamton avoided history with a win over Vermont last week. The last winless team in Division I pulled off a huge upset of Vermont at home. Binghamton will not win the America East tournament, but I say the third time is a charm against UMBC in the No. 8 vs. No. 9 game. Bearcats win, 39-38.

Here is how I see the America East tournament playing out.

No. 1 Stony Brook over No. 9 Binghamton

No. 4 Albany over No. 5 New Hampshire

The America East tournament winner will most likely be a No. 16 seed in the NCAA Tournament. While the Catamounts don't have Taylor Coppenrath and T.J. Sorrentine to lift them in the tournament, they will have plenty to be proud of. This would be their fifth tournament trip in the past nine years.