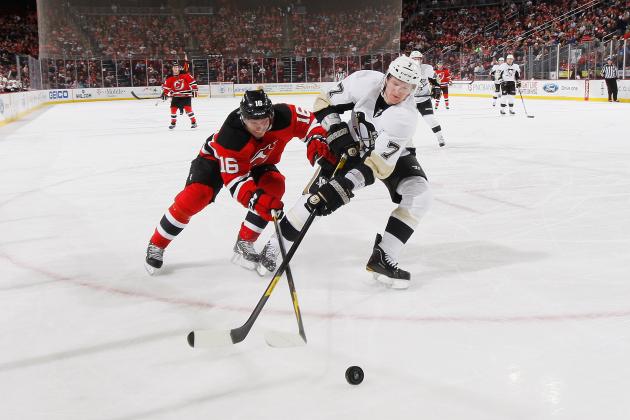 The Penguins are in trouble.

Not the kind of outside-looking-in standings trouble staring down underachievers like the Capitals or Ducks. The Pens are fifth in the East and trail Philadelphia and Boston by only a handful of points. Trouble is a loaded term to describe a club that has won eight of ten and beaten the Rangers, Bruins and Blues in the last two weeks.

With 14 goals in 14 games, Evgeni Malkin is the only Penguins player still scoring at a regular pace. The rest of the current lines have yet to provide consistent offense. Even linemate James Neal has fallen on hard times with no goals and a minus-6 rating in his last five contests.

The Pens are 2-2-0 since returning from the All-Star break.

The defense is healthy and Marc-Andre Fleury is asserting with each performance that he’s the best big-moment goalie in the game. The only holes in the lineup belong to two of its top three centers, yet the big concern in Pittsburgh isn’t scoring goals, but stopping them.

That starts with the suddenly suspect pairing of Paul Martin and Zbynek Michalek.

A year ago, Pittsburgh’s $45 million duo rebounded after a rough start and formed a legitimate shutdown pairing, a good combo to follow Brooks Orpik and Kris Letang.

The key free-agency acquisitions in 2010, Michalek and Martin were brought in to replace Sergei Gonchar and Mark Eaton and combined for 43 points and a plus-nine rating in their first season with the team. Those numbers played a big part in helping Pittsburgh earn the NHL sixth-best defense, best overall penalty kill and 106 standings points as the East’s fourth seed.

Injuries have played a part in their decline this season, but not significantly. Martin has 16 assists on the season, five shy of his total from last year. However, he has one goal in 46 games and is a minus-8 on the season.

Only Michalek’s minus-11 is worse.

It’s well known amongst Pens fans and the root of their ire for Martin that he is the highest-paid defenseman on the team, at $5 million per year. Michalek is second at $4 million per.

Orpik, currently the longest-tenured Penguins player, makes $3.75 million per year. Letang makes only $3.5 million per season despite leading the Penguins’ defense in points, power play time and Norris Trophy chatter in each of the last two seasons.

The Penguins can’t dump both of their struggling defensemen before the trade deadline hits three weeks from now. Nor should they. However, with seven blue liners on the roster already and rookie blue-chipper Simon Despres nearing a return from injured reserve, a move is going to have to be made somewhere.

Why not move the $5 million Martin contract?

Certainly, the easiest move would be to send Despres back to AHL Wilkes-Barre/Scranton. The 20 year old is in the first of a three-year entry level deal that brings an $840,000 annual cap hit—or, $4.16 million in cap savings versus Martin.

Should the Pens move Paul Martin?

Should the Pens move Paul Martin?

In 14 games in his first NHL season, Despres tallied one goal, three assists, 8 PIM and a plus-four rating while averaging 14:34 TOI per game. Despres finished a minus-one in three of his 14 contests prior to injury and with even or positive ratings in the other 11.

At 6’4″and 205 pounds, Despres is also the biggest defenseman the Penguins have. His physicality has plenty of room to improve, but it’s a trait that won’t go missing if Martin is traded.

Rightfully, though, moving a veteran for a rookie during a postseason push is a big risk. Martin has never missed an NHL postseason in seven-plus years with the Devils and Penguins. Experience counts.

But his trade value may never be as high as at the coming deadline. Barring a significant setback in progress or health, the Penguins will find it near impossible to keep Despres in the minors next season.

While the Pens can hang onto Martin and try to move him this summer before free agency begins, Martin’s trade value and the demand for defensemen will peak in the next three weeks. GM Ray Shero can pounce on the never-ending thirst for defensemen and try to restock the thinning prospect pool, or add draft picks.

After all, any cap space the Pens can create between now and July 1 is going to be aimed at retaining James Neal. Opening up $4-plus million with one trade gives the Penguins the leverage they need to retain Neal, not to mention adding whatever return would come with moving Martin.

And if the team is looking for a veteran presence this postseason while still having the space to lock up Neal before free agency, it’s a commodity that can be had.

From Sam Kasan of Penguins.NHL.com,

A popular trade rumor circulating in Montreal and around the league is the possibility of former Penguins blueliner and 2009 Stanley Cup champion Hal Gill returning to Pittsburgh. While coach Bylsma said that is only a “hypothetical” scenario, he did say that he has an affinity for players that he’s won with in the past.

“Hal Gill was a big part of our team both in the dressing room and on the ice,” Bylsma said. “All those players that you’ve been with you’ve got an affinity for. Hal was a big part of that. Rob Scuderi, Sergei Gonchar. Those are guys you’ve won with. … Hal’s a good player, but that’s a hypothetical.”

There’s no telling whether Martin would be moved to Montreal, or anywhere else for that matter. His name has yet to be mentioned by legitimate sources and trading him would be a salary cap consideration first and foremost.

With Despres displaying quality NHL potential and Neal enjoying career-best numbers in a contract year, salary cap considerations are no topic to sleep on.

We'd like to send you the most entertaining Pittsburgh Penguins articles, videos, and podcasts from around the web.