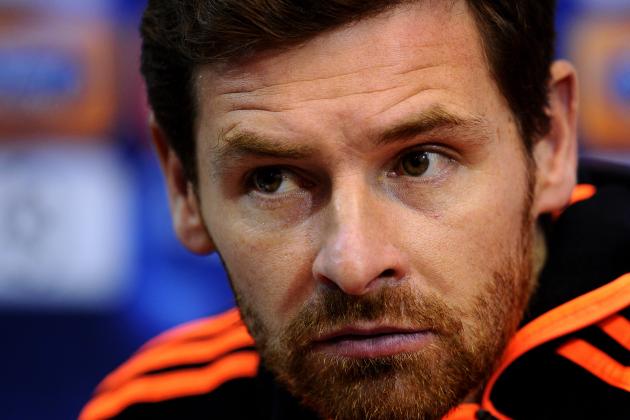 Mike Hewitt/Getty Images
Will Chelsea's manager be sacked in the morning?
757
Reads
2
Comments

Ever since Russian billionaire Roman Abramovich took over Chelsea nearly a decade ago, the club has experienced a renaissance. Chelsea FC has brought in world-class players and won a few trophies, bagging the English Premier League title three times.

But the renaissance has not been without its share of political strife. The Blues have had five managers since Abramovich's assumption of power if you don't count Ray Wilkins' stint and Guus Hiddink's short stewardship at the end of the 2009 season.

But reports of unease among the club's players amidst Chelsea sitting at an unfamiliar fifth place has some wondering if West London's own Henry VIII will strike up the guillotine again and axe Andre Villas-Boas for a new manager ahead of today's Champions League bout.

Only time and the next three matches will tell.

Long before Chelsea appointed their current Portuguese star manager, Andre Villas-Boas, there was “The Special One.”

Like Catherine of Aragon, Henry VIII’s first bride, Jose Mourinho was greeted with huge crowds and great enthusiasm at his coronation at Chelsea in ’04. With Ambramovich's wealth, Chelsea snapped up top players from Arsenal and other storied rivals to shore up an already strong squad including John Terry and Frank Lampard.

Under Mourinho, Chelsea won the league twice and built a track record of dominance, leaving rivals like Man United at times, helpless and embarrassed, while the club went undefeated in England for a nearly a full year.

Yet, Mourinho was given an honorable divorce after the unsatisfactory feat of banking second place in his third season at the helm.

Keeping up with the recent success of The Special One was no easy task, but after Mourinho's departure the Chelsea squad  --strong as any on earth-- remained essentially intact.

So Avram Grant inherited a team that was eager to work with him on regaining the league title and shooting to win the UEFA Champions League.

And they nearly got there. Under Grant as with Mourinho, Chelsea won two-thirds of its matches and battled it's way to the Champions League Final in Moscow, against Manchester United.

But after the Blues lost on penalties, goodbyes were imminent. Only Anne Boleyn's demise was perhaps more readily predicted.

After collecting the FA Cup, and the League Cup and the Premier League crown, the Champions League trophy still eluded Chelsea and losing it to United stung. What better way to start anew than with a coach who had won the World Cup.

So, in the fall of 2008, Luiz Filipe Scolari, the feisty man who coached Brazil again to glory, took on the Chelsea opportunity as the new manager.

By February 2009, Chelsea was barely among the top four after dropping needless points to inferior opponents. Chelsea had drawn 0-0 to a newly promoted Hull and continued an unexciting run of underachievement that culminated in a 2-0 loss to Liverpool.

And so, like the head of Catherine Howard, Scolari's head would roll too with an historic familiarity.

With an enthusiastic fan base, keeping up the spirits of the club was as important as getting back on track.

Yet on the front end, Hiddink said that he would only finish out the 2008-2009 season, and then quit. Why? Because instead of coaching world class players like Lampard and Terry, Didier Drogba and Michael Ballack, he had other plans.

After a short and colorful fling which involved winning another FA Cup for Chelsea in the spring, Hiddink decided he would rather take to The Urals and eastern tundra to coach the national team of Russia.

Eventually both accomplished European pedigree and proper dress code were restored at Chelsea, as was the Premier League title for a short period.

After coming on as temporary replacement for Hiddink, Abramovich hired Carlo Ancellotti. Ancelotti had previously taken over a lifeless AC Milan in 2001, restoring the Rossoneri as a juggernaut at home and abroad, winning the Serie A and the Champions League twice.

The Italian maestro signed a three-year contract reportedly worth £9 million, in July of 2009;  making him Chelsea's fourth permanent manager in less than two years.

Despite his accolades however, Ancelotti has never been the most easily employed; often  criticized by owners (both in Italy and now with Abramovich) and disdained over his defensive mindset and my way or highway approach.

After doing the double in 2010 as Chelsea won both the Premier League and the FA Cup for the first time, Ancelotti's men followed up with a respectable 2011 campaign. But before 2010-2011's conclusion, Chelsea finished second and Ancelotti was fired by the club two hours after a 1-0 loss to Everton.

Andre Villas-Boas, the club's current manager, came on board to similar cheers as most of his predecessors. But off the bat, the new manager rattled sabres with club favorites like Lampard, who he benched initially; while failing to get goals out of Fernando Torres in Chelsea's less than stellar run so far.

Standing at fifth place with a few easier-to-beat rivals ahead, Bolton and West Brom, Chelsea has the opportunity to pick up the points by winning games it desperately needs to win.

Just the same, losing one or both games before facing leaders Man City in Manchester puts Villas-Boas in a precarious position.

With some already calling for change, a loss of both games or a crash out of the Champions League against Napoli may prove insurmountable for the Portuguese manager's continued tenure at Stamford Bridge. Some say one misstep might do him in.

Jose Mourinho seems to have finally found his stride at Real Madrid. While the galacticos failed to beat their arch rival Barcelona this season they are still over ten points clear at the top of the Spanish Liga, with things looking very good.

After Chelsea fans chanted Mourinho's name from the stands during a loss against Everton, The Special One urged Chelsea fans to back their current manager, as have many football pundits.

Still, many fans at Stamford Bridge are unhappy, knowing that if the season ended today the 2011 runners-up wouldn't return to top level European soccer.

One difference compared to medieval times is that, nowadays, the executioner wears no black hood. Instead of bells tolling, the death knell for a football manager comes out publicly, via the modern channels of the press release and sports wire through the news. Hopefully the damned are notified of their pending execution at least before the papers.

Though unlikely for Chelsea, many of the clubs who have played manager roulette find themselves relegated to lower leagues. Even former powerhouse Newcastle, who took third place in 2003 after a series of Champions League years, fell to the lower leagues six managers in six years.

No matter what the near future may hold, let’s hope that, like Katherine Parr, the last wife of Henry VIII, the club and Chelsea's fans will always go on to outlive and outlast the club monarch.

Andy Frye has written for ESPN.com, FiveonFive magazine and the Chicago Sun-Times. Follow on Twitter at @MySportsComplex.