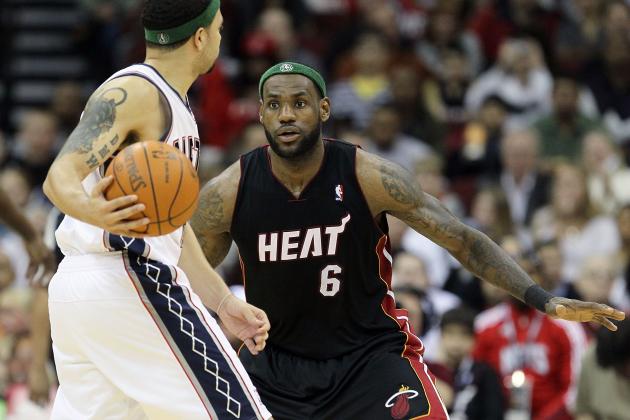 The latest brainless attack on LeBron James, led by the obsessed Skip Bayless, is to dismiss his undeniable statistical dominance as "stat stuffing," and this charge is being repeated by a lot of "fans" who don't understand the game of basketball. For their benefit, I'll give some examples of stat stuffing:

1. A defensive player picks up steals and blocks by ignoring his defensive assignment, and the guy he's supposed to be covering scores a ton, even though the defensive player does register a few steals or blocks in the stat columns. That's stat stuffing. Does James do this? On many many nights, James holds the small forward he is covering to less than half his scoring average. No, he does not stat stuff on defense.

2. Looking to pick up rebounds, a player rips them away from his own teammates, or drifts off the guy he's covering so that he can hover around the basket and add a few boards to his totals. I've never seen James do this.

3. Looking to add an assist, a player on a one-on-none fastbreak doesn't simply go up and get the easy basket but waits for a trailing teammate and flips it to him. Maybe the guy needs one more assist for a triple-double, but that kind of play really shouldn't count. I've never seen James do this.

4. In a blowout, a player shoots a ton, trying to pad his scoring totals before his coach takes him out of the game for good. Or in any other way, a player seems to have an eye on the standings among the scoring leaders (David Robinson once scored like 60 points on the last game of the season in order to win a scoring title). James has made it clear that he is not competing for the scoring title, and when the Heat blow out their opponents, he happily sits and lets the bench guys get their chances.

In effect, stat stuffing is consciously exerting oneself to pad one's numbers in various statistical categories, rather than trying to make plays to give one's team the advantage and the win.

Say what you like about James—that he doesn't come through in the fourth quarter, for instance, but he's not a stat stuffer. Bayless sounds like an ignoramus when he uses this label (and so do you when you repeat it). If anything, James' sometimes frustrating passivity in the fourth quarter suggests that the last thing on his mind at such times is padding his stats. He should actually be more selfish in those moments.

But James' statistical dominance (for example, PER, Win Shares) comes from his making basketball plays (even if they do tend to come in the first three quarters). On average, there are 90 possessions for each team in an NBA basketball game, and James impacts a greater share of those 180 possessions than anyone else in the game right now.

So, enough with the stat stuffing nonsense.

We'd like to send you the most entertaining Miami Heat articles, videos, and podcasts from around the web.