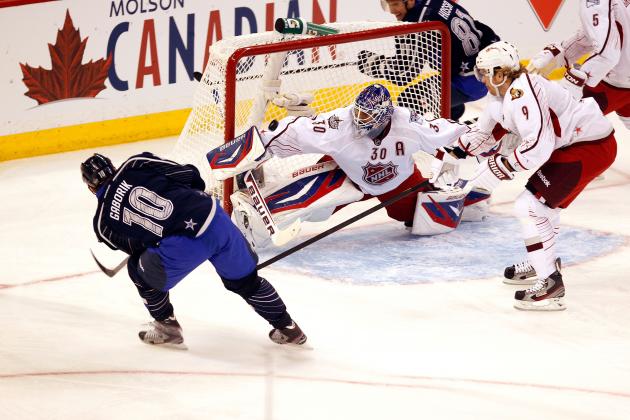 It seems as if a handful of NHL players put "hat trick" at the top of their New Year's resolutions lists.

Marian Gaborik’s three-goal, one-assist MVP performance in Sunday’s NHL All-Star game propelled Team Chara to a 12-9 victory over Team Alfredsson. Gaborik's hat trick marked the 32nd hat trick of the season, and the 13th in the month of January.

Although All-Star Game stats don’t count toward season stats, Gaborik will go down in history as the 16th player to record a hat trick in the All-Star game. The last player to do it was Rick Nash in 2008.

Thus far in the 2011-12 season, January has been an exciting month in terms of NHL hat tricks. There were only seven in December and nine in November.

Let's revisit the 12 hat tricks of the scoring-infested month of January 2012.

Sergei Kostitsyn started the year out right by contributing three goals in the Nashville Predators' 5-3 win over the Calgary Flames on New Year’s Day.

Kostitsyn scored in each period for his first career hat trick, including an empty-net goal in the last 30 seconds of regulation.

Since Jan. 1, Kostitsyn has eight points in the last 11 games, as the Predators return from the All-Star break in fifth place in the Western Conference.

On Jan. 4, Lars Eller scored four goals to keep the Canadiens on top in a close game against the Winnipeg Jets, and led a third-period surge to shut down the Jets 7-3.

The Canadiens scored four of their seven goals in the third period, two of which were made possible by Eller. His fourth goal of the game was on a penalty shot, where he beat Jets goaltender Chris Mason with a backhander.

Sergei Kostitsyn's older brother, Andrei, threaded the needle to find Eller, who connected on his third goal of the game.

Danny Briere was the hero on Jan. 7, scoring all three of the Flyers’ goals to lift the Flyers 3-2 over the Ottawa Senators in overtime.

Briere scored the game-winner in the final seconds of overtime to complete his fifth career hat trick.

The victory ended the Senators' four-game winning streak. The Sens are currently three points behind the Flyers in the Eastern Conference.

On the same day as Briere's hat trick, Shane Doan netted one of his own to lift the Phoenix Coyotes 5-1 over the New York Islanders.

Doan scored in each period, including a bullet that got past Evgeni Nabokov with one-tenth of a second left in regulation to complete his first career hat trick.

Doan has 15 goals and 15 assists at the All-Star break, as the Coyotes look to make a second-half surge to sneak into the playoffs. They are currently 12th in the Western Conference.

Corey Perry's hat trick on Jan. 8 came in a moral victory for the Anaheim Ducks. The commanding 7-4 win over the Columbus Blue Jackets was the first time the Ducks had won consecutive games since mid-October. And it was the most goals the Ducks had scored in a game all season long.

The hat trick was the fourth in Perry's career, and there will be many more to come. Perry had a goal and an assist in Sunday's All-Star game.

Viktor Stalberg had an explosive game on Jan. 10, as the Chicago Blackhawks surged to defeat the Columbus Blue Jackets 5-2.

His first goal came in the second period off a slick pass from Patrick Kane from behind the net. And he put back a rebound off a Brent Seabrook slap shot in the third period for goal number two. His third goal came as a rather hard-fought empty-netter in the last two minutes of the game.

The Blackhawks have benefited from Stalberg's consistent production this season—he has 14 goals and 15 assists. The hat trick was the first of his career.

Saku Koivu netted his second career hat trick on the same day as Stalberg's hat trick, and just two days after teammate Corey Perry scored a hat trick of his own.

The Anaheim Ducks cruised to a 5-2 victory over the Dallas Stars for their third straight win since October. It was the first time in franchise history that the Ducks had recorded hat tricks in consecutive games.

Koivu tipped in a shot from the point in the first two minutes of the game for his first goal. He scored twice in the third period, including an empty-netter to complete the hat trick.

Friday the 13th was a lucky day for Troy Brouwer. On Jan. 13, Brouwer's first career hat trick was vital in the Washington Capitals' 4-3 victory over the Tampa Bay Lightning.

Even Brouwer's empty-net goal proved to be essential. After his hat trick goal put the Capitals up 4-2 with one minute left in regulation, the Lightning answered back with a goal by Vincent Lecavalier in the last 10 seconds of the game.

Brouwer scored in each period of the game to complete a Friday the 13th to remember.

Evgeni Malkin did it all on this night, as he recorded his eighth career hat trick and fifth career five-point game in Pittsburgh's 6-3 win over the Tampa Bay Lightning on Jan. 15.

Malkin assisted on both of James Neal's goals to add to his three goals. After a scoreless second period, both teams broke out in the third—the Lightning scored three times and the Penguins scored four times. But Malkin's hat trick was the difference in the game, as the Penguins held on to win 6-3.

Malkin also added a goal and an assist in Sunday's All-Star game. The Penguins, currently fifth in the Eastern Conference, will count on Malkin's skill and confidence to remain strong contenders in the East.

The Calgary Flames never trailed in their dominant 6-2 rout of the Edmonton Oilers on Jan. 21. The Flames ignited early and jumped to a 3-0 lead by the end of the first period.

Lee Stempniak scored in each period to record his second career hat trick. He scored the lone goal in the second period to put the Flames up 4-0, and he completed the hat trick with an empty-net goal assisted generously by Olli Jokinen.

The Flames hope to build on recent success to make a run for the playoffs in the second half of the season. They are currently 11th in the Western Conference but are undoubtedly within striking distance from a playoff appearance. Stempniak is tied for third on the team with 12 goals.

Scott Hartnell spurred an incredible comeback for the Philadelphia Flyers on Jan. 22 against the defending Stanley Cup champion Boston Bruins, but only to come up short in a shootout.

The Bruins took an early 3-1 lead in the first period, but Hartnell came alive in the second period, scoring three unanswered goals to record his sixth career hat trick and put the Flyers up 4-3. The Bruins answered back in the third period with two quick goals from David Krejci and Gregory Campbell, but Maxime Talbot's slap shot midway through the third period evened the game at five apiece. After a scoreless overtime period, the Bruins would go on to win the shootout and spoil Hartnell's second-period heroics.

It was only the third time this season in which the hat trick scorer's team lost the game.

Hartnell contributed two assists in Sunday's All-Star game. He currently leads the Flyers in goals with 25.

In their last game before the All-Star break on Jan. 24, the Washington Capitals faced the Boston Bruins in an Eastern Conference showdown at home.

The timing of Mathieu Perreault's first career hat trick couldn't have been more perfect—his three-goal effort lifted the Caps over the Bruins 5-3 in a back-and-forth grudge match between the Eastern Conference's second- and third-place teams.

Each of Perreault's goals broke ties throughout the game. His first goal early in the second period put the Caps up 2-1, and his second goal on a breakaway put them up 3-2 late in the second period. His last goal, which proved to be the game-winner, broke the 3-3 tie in the third period.

Perreault and the Caps should feel good coming back from the All-Star break, and they will need all the fire power they can get when it comes time for a rematch against the Bruins on Feb. 5.

It is only fitting that the last day of January and first day back from the All-Star break was filled with scoring. In the 13 NHL games played on Jan. 31, 78 goals were scored and six players had multi-goal performances.

The Phoenix Coyotes jumped on the Anaheim Ducks early, clutching a 1-0 lead at the end of the first period. But Cogliano took over in the second period, scoring three consecutive goals in a span of less than seven minutes. Teemu Selanne scored an empty net goal in the third period to seal the deal 4-1.

With his consecutive goals, Cogliano is the fifth Duck in franchise history to record a natural hat trick.

Cogliano has 11 goals and nine assists this season, as the Ducks hope to work their way back into playoff contention. They are currently 13th in the Western Conference.