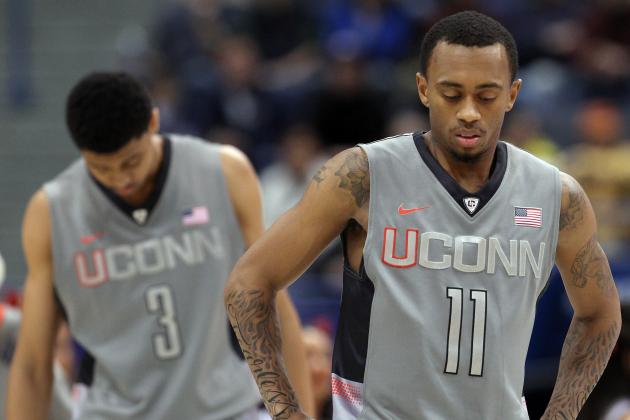 Kentucky tops the college basketball B/R Writers Rankings again, but several Top 25 upsets led to yet another shakeup in the poll.

The Big 12 might have suffered the biggest hit, as Missouri, Kansas and Kansas State all lost. However, two Big East teams fell from the ranks.

If you're a Bleacher Report college basketball writer who wants to participate in the weekly poll, message me with your email address to indicate your interest.

Harvard confirmed its superiority in the Ivy League by thrashing Yale by 30 points in New Haven and then beating Brown by nine.

Tommy Amaker's squad is on a roll since its Jan. 3 setback at Fordham, and the Crimson appeared on nine ballots and peaked at No. 20.

Florida State's inspired offensive play persisted for yet another game, as the Seminoles routed Wake Forest by 23 points on the road.

The experienced Seminoles have hit their stride, and they sit in a tie with Duke and UNC—both of whom they beat—atop the ACC.

Eight voters included Florida State on their ballots, placing them between No. 18 and No. 25.

Vanderbilt followed up its disappointing loss to Mississippi State with a sound beating of Tennessee and a narrow victory over Middle Tennessee State. Since Dec. 19, the Commodores are 10-1.

Their hot streak convinced eight voters to rank them, and one voter had the 'Dores at No. 14.

After beating Indiana for its fifth straight win, Wisconsin is back in the B/R Top 25.

Jordan Taylor has played more like himself, averaging 15 points and compiling a 6:1 assist:turnover ratio during the streak, and the team's ugly three-game stretch of four weeks ago seems to be in the rearview mirror.

The Badgers currently sit in third place in the Big Ten, but a win over Ohio State in Madison this weekend would tighten the race.

Wisconsin appeared on all but three ballots, ranking as high as No. 11.

The Bulldogs, who host a struggling Auburn squad for its sole game this week, didn't appear on two ballots but peaked at No. 17.

Michigan earned a tough road win at Purdue but fell to Ohio State on Sunday.

Just one game out of first place, the Wolverines have a crucial upcoming week with games against Indiana and Michigan State. Michigan risks being swept by the Hoosiers but also has the chance to sweep the Spartans.

All but one voter ranked the Wolverines, and one had them at No. 15.

Saint Mary's picked up wins at Loyola Marymount and BYU to ascend three spots in the rankings.

The Gaels, who have not lost since Dec. 22 against Baylor, face San Diego this week in a rematch of a surprisingly close road win by Saint Mary's.

After beating Wyoming with relative ease, San Diego State endured a stunning shellacking by Colorado State. The Aztecs fell down early against the Rams and couldn't narrow the gap throughout the second half.

Steve Fisher's squad hosts last-place Boise State and TCU this week, so the Aztecs should be able to get back on track.

Indiana doubled its 50-point scoring output at Wisconsin to drop 103 points on Iowa. Nonetheless, the slumping Hoosiers lost to the Badgers and have fallen in four of their last six.

Since losing four of six, Marquette has reeled off six consecutive wins to sit within 1.5 games of Syracuse.

The Blue Jays have now won 10 straight and 13 of their last 14, but games against Illinois State and at Northern Iowa this week should not be taken lightly.

Pittsburgh received a much-needed boost from the return of Travon Woodall, but Georgetown still lost to a Panthers team that had been struggling. The Hoyas dug themselves in a hole early—thanks to terribly cold shooting—and couldn't pull off a comeback.

Georgetown, which hosts UConn and South Florida this week, ranked between No. 12 and No. 17.

Florida remained at No. 12 after fighting off Ole Miss and pulling away from Mississippi State last week.

The Gators, who lost their first SEC game, have won five consecutive games and are tied with Vanderbilt for second place, and the Commodores will visit Gainesville this Saturday.

One voting point in favor of UNLV enabled the Rebels to edge Florida for No. 11. However, the Rebels nearly lost to MWC doormats Air Force and Boise State, beating both in overtime.

Ivan Aska returned to the Murray State lineup, and the Racers continued their undefeated start to 2011-12, beating Eastern Illinois by 15 points.

Second-place SE Missouri State comes to town this week, but no visitor has come within eight points of the Racers at the CFSB Center.

In its only game last week, Michigan State defeated Minnesota by 16 points. The Spartans trail Ohio State by a half-game, and they will visit Illinois on Tuesday before hosting Michigan on Sunday.

The weekend's trendy upset pick came to fruition, as Iowa State defeated Kansas in Ames. The Jayhawks struggled with a shorthanded Texas A&M earlier in the week, so the loss to the Cyclones dropped KU to No. 8.

Kansas will host Oklahoma on Wednesday and visit Missouri for a heavily anticipated contest on Saturday.

Despite the Jayhawks' struggles, two voters ranked Bill Self's squad at No. 4. The Jayhawks appeared as low as No. 12.

UNC beat NC State and Georgia Tech by an average of 15.5 points to keep pace with Duke and Florida State in the ACC standings.

With road games at Wake Forest and Maryland this week, the Tar Heels should be able to continue their winning ways.

After losing to Kansas and Missouri, Baylor bounced back with wins over Oklahoma and Texas last week.

The Bears will be even tougher to beat if Perry Jones III continues his exceptional play—he averaged 21.5 points and 13.5 rebounds last week.

Wednesday's loss at Oklahoma State dropped Missouri from the No. 2 hole, but the Tigers will have a chance to climb back to the top if they beat Texas and Kansas this week.

Voters ranked Missouri as high as No. 2 and as low as No. 9.

Duke responded to the Florida State loss by beating Maryland and St. John's. Although the Blue Devils dominated the Johnnies in the first half, they couldn't seal the deal until the final minute.

Duke will play Virginia Tech and Miami this week, but the anticipation of next week's trip to Chapel Hill is certainly rising.

Easy wins over Penn State and Michigan last week helped Ohio State capture the No. 3 ranking, but Saturday's tilt at Wisconsin shouldn't be as painless.

The Buckeyes sit one game ahead of the Badgers, who want to re-establish the Kohl Center as a significant advantage.

Thanks to Missouri's loss and the controversial ending to its game against West Virginia, Syracuse secured the No. 2 ranking this week.

If you haven't heard, the referees missed a blatant goaltend of a Deniz Kilicli layup that would have, in all likelihood, forced overtime.

Nine voters had the Orange at No. 2, but no one pitted them lower than No. 4.

Once again, Kentucky, which picked up two easy road wins last week, is the unanimous No. 1 in the B/R Writers Rankings.

The Wildcats beat Georgia and LSU by an average of 18.5 points, and Terrence Jones broke out for 27 points and nine rebounds against the Tigers.

If he comes to life, it's hard to picture the Wildcats losing anytime soon.