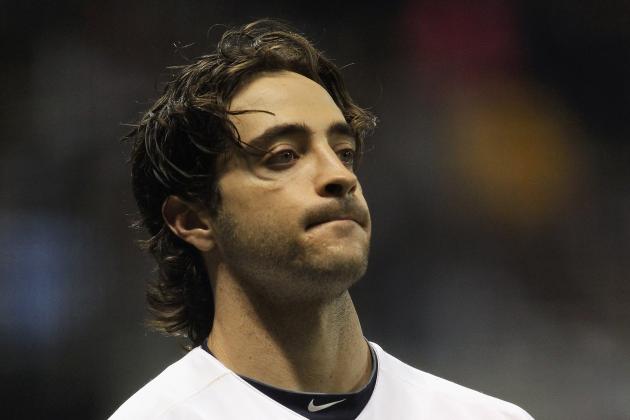 It’s been a rather unpleasant offseason for Milwaukee Brewers left fielder and 2011 NL MVP Ryan Braun. However, if recent indications prove true, things may take a turn for the better.

Last month, news broke that Braun tested positive for a banned substance that earned him a mandatory 50-game suspension to start his 2012 campaign. He has since appealed to the league in order to prove his innocence, but many are skeptical that his case could be overturned.

Brewers beat writer Tom Haudricourt of the Milwaukee Journal Sentinel reported earlier today that former ESPN personality Dan Patrick has unearthed from “somebody in the process” that Braun may in fact be an innocent man and may be relieved of his suspension.

According to Haudricourt himself:

Patrick said he was told Sunday, again, by “somebody involved in the process” that the MLB test might be at fault and that Braun could be found innocent. The arbitration panel, with independent arbitrator Shyam Das expected to cast the decisive vote, has 25 days to render a verdict but it could come as soon as later this week.

Braun, who officially accepted his National League Most Valuable Player award on Saturday night in front of the Baseball Writers Association of America in New York City, has vehemently denied the allegations against him. He told USA Today that the charges filed against him were “BS.”

Along with first baseman Prince Fielder, Braun was critical in the Brewers' offense last season, posting 33 home runs, 111 RBI and a league-best OPS of .994. However, Braun fell behind former Mets shortstop Jose Reyes for the NL batting title by mere decimal points.

If Braun is found innocent, his name will be expunged from the infamous list of players who have failed MLB's drug-testing policy. Additionally, he would give the Brewers an obvious offensive advantage in their journey to become NL Central Champions in 2012.

Braun's official appeal took place last Thursday, according to the New York Daily News, but there is no definitive timetable for when an announcement regarding the matter will take place.

We will continue to keep you updated through the coming days as information becomes available.

Alec Dopp covers the Milwaukee Brewers as a Featured Columnist at Bleacher Report. Follow him on Twitter @alecdopp and read his blog.