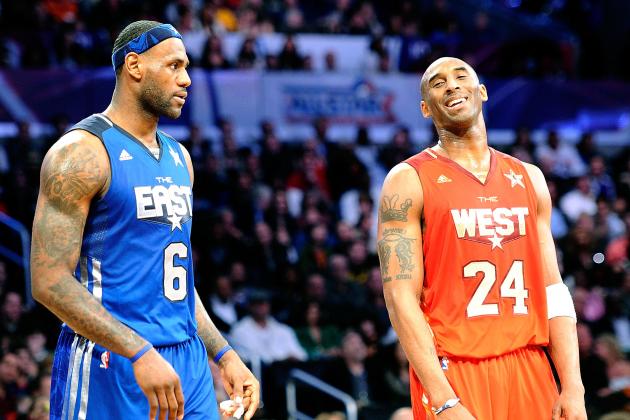 It’s well known, or should be, that fans don’t always make the best choices in their votes for the NBA all-star game, casting them based on reputation and sometimes ignoring what has actually been taking place on NBA courts.

I’m not going to get all worked up about it, and maybe as some say, the game is for the fans and therefore when there is a difference between the fan favorites and the best players, it’s the favorites who should be out there anyways.

Still, sometimes the bone-headedness of the fans becomes downright egregious, as when they almost voted Allen Iverson onto the starting lineup in his final, truncated NBA season (2009-10).

And there’s no harm in speculating as to who should be in.

So how about this year?  There are nine days left to vote.

How are the fans doing in their choices?

LeBron, Howard and Rose are obvious choices—the fans got these right.  As for Wade, it depends.

I love Wade’s game, and he’s the best 2-guard in the East, certainly.  But he’s been hurt, and he didn’t start the season well (his scoring and efficiency are down), probably because of a bruised heel.  So, technically speaking, he hasn’t actually earned his spot based on his play.

I think I’d have Joe Johnson start and Wade as a substitute.

Carmelo Anthony should not start, and I question whether he should even be among the subs.

He is scoring 25.7 points per game, sure, but once again, he’s not scoring efficiently (he is actually below the league average in scoring efficiency).  The Knicks have now lost six games in a row, and some of the blame has to fall on Carmelo.

I watched the Knicks last night, and at this point there are people in the stands who, when Melo goes into ISO mode, are actually screaming at him to move the ball.

Melo has had a disastrous impact on Amare Stoudemire.  And the Knicks are now something like 20 and 25 (including the playoffs) since acquiring Melo, while his old team, Denver, are something like 30 and 15 since the trade.

Did the Nuggets actually get better by subtraction?

There are fans who will swear that Melo is the best pure scorer in the game.  When I hear that, I feel like I’m looking at a one-foot length by the ruler, but people keep swearing it’s a foot and a half.

Melo scores a lot because he shoots a lot, but his field-goal percentage is currently .404, and his teammates have been negatively impacted by his presence on the court.

And then there’s Melo’s lack of defense...

I think it should go without saying that Amare should not be among the East All-Stars either.

Who should the East forwards be, after LeBron?

Chris Bosh has been superb since Wade got hurt, and I think he’s played his way into the starting lineup.  Josh Smith and Luol Deng should be substitutes, and Ryan Anderson should get consideration.

To wrap it up on the east, Roy Hibbert should be the backup center, and Rondo the backup point guard.  Hibbert and Josh Smith are not even among the players receiving votes.  Bosh and Deng are a distant fifth and sixth among forwards.

There are people who will argue for Kevin Love, and certainly Love’s production in the last couple of seasons has been impressive, but Minnesota’s lack of winning just has to be part of the picture when evaluating Love.

I don’t know what Love’s numbers would be if he played for a good team with talented teammates, but I’m willing to bet that they’d be at least a bit more modest.

With that being said, Love should be the backup power forward for the West, but he's only fifth  in the voting.

I don’t know what to say about Dirk.  He certainly hasn’t played his way onto the All-Star roster this season, but maybe he earned his spot by what he did in last year’s postseason.

I don’t think Andrew Bynum should start.  Marc Gasol has earned the spot, partly as a result of Bynum missing those four games at the beginning of the season.

But Bynum deserved to miss those games—what he did at the end of the Dallas series was disgraceful.  If you were an NBA GM, you’d pick Bynum ahead of any center but Howard, of course, but Gasol has earned the spot (he's only third in the voting).

The fans are voting Chris Paul as the starting point guard, and I have no doubt that he is the best one, but he’s been missing games due to injury.  In my view, Kyle Lowry has slipped past him with his play, but still, I’d be OK with Paul as the starter and Lowry as the backup.

The problem is that Lowry is behind Ricky Rubio, Steve Nash and Russell Westbrook among the point guards.

Among 2-guards, James Harden should be the backup to Kobe, but he’s not even on the ballot.  Yes, I know he doesn’t even start for the Thunder, but he plays starter minutes (29.5 minutes per game) and his play has had a lot to do with the Thunder’s excellent record.

Finally, I think Danilo Gallinari should be Kevin Durant’s backup at small forward.