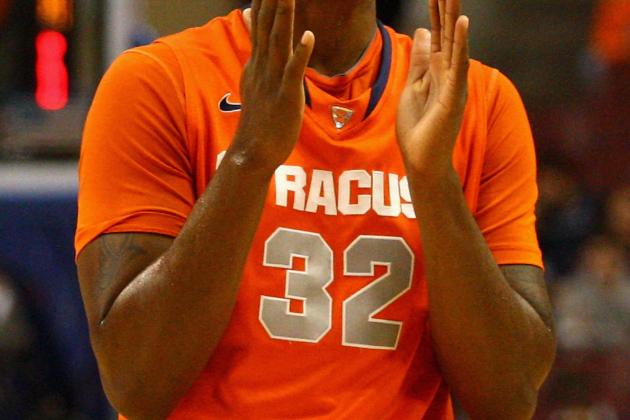 UNC was embarrassed. So was Louisville.

Michigan State was stunned. So was Michigan.

As usual, Syracuse took care of business. The Orange are the unanimous No. 1 once again, but where does everyone else stand?

If you're a Bleacher Report college basketball writer who wants to participate in the weekly poll, message me with your email address to indicate your interest.

Kansas State and Baylor engaged in one of the most entertaining games of the season, but Rodney McGruder's 30 points weren't enough for the Wildcats, who lost 75-73.

Had Frank Martin's squad taken care of business at Oklahoma, it would probably stand closer to last week's ranking. However, the Wildcats' loss to the Sooners resulted in a five-spot drop.

Five voters left KSU off their ballots, and one pitted them at No. 19.

The Wildcats should be favored in their games against Texas and Oklahoma State this week, so with only a thin grasp on the poll's final spot this week, they'll probably need to win both to stick around.

Though Seton Hall blew a late 10-point lead at South Florida, the Pirates cracked the Top 25 a week after barely missing out.

The Pirates received significant help from one voter, who ranked them No. 7. Five voters left the Pirates out of the mix.

This week, Seton Hall plays Villanova, which has lost five of six. The Pirates shouldn't take the road game lightly, though, because the Wildcats have shown signs of coming together recently.

After losing three of five at the end of December, the Fighting Illini are 3-0 in the new year. However, they shouldn't underrate games at Penn State and versus Wisconsin this week.

Six voters left Illinois off their ballots, but one ranked Bruce Weber's team at No. 8, helping them snag the 23rd spot.

Since losing the MVC opener, Creighton has reeled off six consecutive wins.

Doug McDermott is finally cooling off from deep, but he's still shooting 53.2 percent despite missing six of his last seven.

The Blue Jays, who were ranked as high as No. 15, seek revenge against Missouri State this week.

Louisville fell to No. 12 last week after losing at home to Notre Dame. Results worsened, though, when the Cardinals were routed by Providence.

After rebounding for a win against DePaul, Rick Pitino will try to lead his team to a much-needed win at Marquette this week.

Louisville came in as high as No. 14 and as low as unranked.

Marquette used a rout of St. John's and a win over Pittsburgh to move up one spot this week.

Two voters left the Golden Eagles off their ballots, but several ranked them in the Top 20—they came in as high as No. 14.

Though the Aztecs are now 1-0 in the MWC, they'll visit one of the most raucous environments in college hoops—the Pit of New Mexico—this week.

Three voters put San Diego State in their Top 15, but two others kept them off their ballots entirely.

Arnett Moultrie is playing his way into a potential lottery pick, and his 25-point, 13-rebound effort on Saturday led Mississippi State to a win over Alabama.

The Bulldogs, who have played several close games recently, visit Ole Miss and Vanderbilt this week. The Rebels recently dismissed leading scorer Dundrecous Nelson, while the Commodores appear to have hit their stride with a healthy Festus Ezeli.

Fortunately for Michigan, Northwestern couldn't thwart the Wolverines' comeback. Otherwise, the Wolverines would have endured an 0-2 week, which would likely have banished them to the 20-25 range.

In-state rival Michigan State will visit Ann Arbor this week, so the Wolverines have an opportunity to redeem their 16-point loss at Iowa.

Michigan appeared on every ballot, but rankings varied from No. 13 to No. 24.

The combination of easy opponents and limited game action since Christmas might have left UNLV somewhat rusty for its visit to San Diego State.

The Rebels, who will host TCU and New Mexico this week, lost to the Aztecs on Jamaal Franklin's buzzer-beating layup.

Mike Scott continued to strengthen his case for ACC Player of the Year, but Virginia couldn't pull off the upset at Duke.

Still, the three-point loss in combination with other teams' worse losses helped Virginia move up a few spots in the poll.

Only one voter had the Cavaliers in the Top 10, but no one left them off their ballots.

Florida bounced back from its stunning loss at Tennessee to beat Georgia and South Carolina by double-digits.

Though one voter kept the Gators on the periphery of his Top 25, everyone else had them inside the Top 20—one voter had Billy Donovan's squad as high as No. 8.

Georgetown shot 59 percent from the floor but lost to Cincinnati at home. Though the Hoyas' second straight loss was easily avoidable, Jason Clark and Co. beat St. John's at Madison Square Garden by 20 points on Sunday.

This week, the Hoyas should take advantage of their inferior opponents—DePaul and Rutgers.

Most voters ranked Georgetown in the 13-15 range.

It turns out Murray State is really good. Despite missing senior Ivan Aska—the team's top rebounder and No. 3 scorer—for the past four games, the Racers haven't missed a beat.

Still, though, voters don't know how to evaluate Murray State, which explains the disparity in individual rankings. The Racers came in as high No. 6, as low as No. 20 and several places in between.

A week after being swept on the Big East New Jersey road trip, UConn picked up two much-needed wins—first against West Virginia and then at Notre Dame.

The Huskies, who host Cincinnati and take a break from conference play to visit Tennessee, primarily ranked between No. 9 and 12.

First, Indiana slipped up at home against Minnesota. Then, the Hoosiers were absolutely embarrassed by Ohio State.

That's not a recipe for staying at No. 6.

Most voters ranked the Hoosiers around No. 10 and 11.

In another tie, Kansas jumped to No. 8 after beating Texas Tech and Iowa State last week.

A home game against Baylor and a trip to Texas await the Jayhawks, who came in as high as No. 5 and as low as No. 17.

Although Michigan State routed Iowa, the Spartans dropped one spot after losing to Northwestern. The Wildcats led the entire second half.

With a trip to Ann Arbor this week, Michigan State has an opportunity to bounce back with a good win.

The majority of voters ranked the Spartans between No. 9 and 11.

Florida State hadn't scored 90 points against Jacksonville, Stetson or any other opponent until this weekend, when the Seminoles trounced UNC 90-57.

Yes, Deividas Dulkys was on fire, but how could the Tar Heels have lost by 33 to a team that was just embarrassed by Clemson, 79-59?

Despite avenging its New Year's Eve loss to Indiana, Ohio State dropped one spot because it lost to Illinois.

Voters ranked the Buckeyes between No. 4 and 10.

The faltering of the Big Ten teams ahead of it last week enabled Missouri to jump to No. 5.

In their first game since losing their perfect record, the Tigers earned a win at underrated Iowa State. Then, they beat Texas after leading most of the contest by double-digits.

After fending off Virginia's upset bid, Duke earned a seven-point win at Clemson to remain undefeated in ACC play.

The Blue Devils, who rode Andre Dawkins' 24 points off the bench to beat the Tigers, ranked as high as No. 3 and as low as No. 7.

Baylor, which earned a tough win at Kansas State and dominated Oklahoma State, finished just six points behind Kentucky in the voting this week.

A tough week awaits the Bears, who visit Kansas before hosting Missouri.

Kentucky struggled on the road this week, but the Wildcats pulled off victories at Auburn and Tennessee.

Yes, Kentucky has had to work hard for its last two wins. However, the SEC is so weak that the Wildcats, who received nine second-place votes, will be able to win on "off nights."

Perfect record intact, Syracuse is once again the unanimous No. 1 in the B/R Writers Rankings.